Mexican Independence Day 2020 Date: Know History and Significance of the Day That Celebrates Mexico’s Declaration of Independence From Spain in 1810 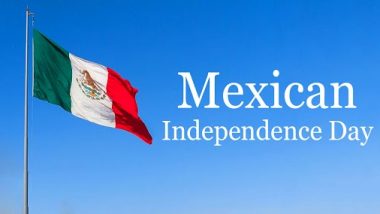 Mexican Independence Day is celebrated every year on September 16. The special day is marked with great festivities that celebrates Mexico’s declaration of independence from Spain in 1810. The day is a national holiday and is filled with national pride, colorful parades, concerts among other things. Mexicans across the world commemorate this important event in their country’s history. It was this day in 1801 when a brave priest in the village of Delores rang his church bell and delivered a powerful speech that set the War of Independence from Spain in motion.

In short, Mexican Independence Day celebrates the country's fight for independence from Spain. Even the President of Mexico participates each year by ringing that same bell, which is now over 200 years old. It is a day off for the general public and schools and most businesses are closed on this day.

Mexico was once known as New Spain and was ruled by the kingdom of Spain for over 300 years. The native Mexicans were oppressed, farm land and personal wealth was confiscated and only Spaniards were allowed to hold political posts. It was one day that a Catholic priest in the town of Delores named Miguel Hidalgo y Costilla decided to ring the church's bell on September 16, 1810 and and delivered a speech now known as the Grito de Delores (Cry of Delores), demanding the end of Spanish rule. This led to the brutal Mexican War of Independence, which lasted over a decade.

It was on August 24, 1821, that Spain withdrew and officially recognized Mexico as an independent country. Hence, Father Costilla is known as the Father of Mexican Independence. Mexican Independence Day has been celebrated every year since that momentous day on September 16, 1810.

The day signifies the importance of the day that celebrates Mexico’s declaration of independence from Spain in 1810. Mexicans celebrate their country’s Independence Day with fireworks, feasts, dance and music on September 16. Streets across Mexico are decorated with flags, flowers in the colors of the Mexican flag – red, white and green in public areas in cities and towns in Mexico.

The most popular events connected to Mexican Independence Day is when the President of Mexico rings the 200 year-old bell Father Costilla used in 1810 and recites the Grito de Delores speech in front of people. This event is broadcasted live to millions via Mexican TV and radio the evening of September 15.

The liberated country adopted Mexico as its official name. Mexico's independence from Spain took a decade of war. The day was first celebrated on September 16, 1812 in Huichapan, Hidalgo. Gutiérrez de Lara commanded and led Mexico to victory. Independence was achieved by the Declaration of Independence of the Mexican Empire on September 28, 1821.

(The above story first appeared on LatestLY on Sep 15, 2020 08:01 PM IST. For more news and updates on politics, world, sports, entertainment and lifestyle, log on to our website latestly.com).