Miss Universe 2021 Winner Is Harnaaz Sandhu! All You Need To Know About the Indian Beauty Queen Who Won Coveted Crown at the 70th Edition of Beauty Pageant

Harnaaz Sandhu represented India at the 70th Miss Universe 2021, held in Eilat, Israel, and won the title for Miss Universe, 2021. Ahead of the beauty pageant which has all the eyes of the world on it, let us get to know about our beautiful Indian contender better who brought the crown home after 21 years. 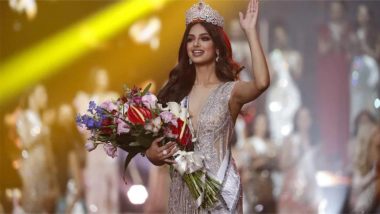 Miss India Harnaaz Sandhu from Chandigarh beat 79 other participants to emerge as the Miss Universe 2021 title winner. She is now the third Miss Universe titleholder from India, 21 years after Lara Dutta won the title in 2000. She edged out contestants Paraguay and South Africa to claim the crown. Ms Sandhu was presented the crown by Andrea Meza, former Miss Universe 2020 from Mexico as her new successor.

Who Is Harnaaz Sandhu?

Harnaaz Sandhu belongs from Chandigarh, Punjab. The new Miss Universe did her early education at Shivalik Public School, Chandigarh. The 21-year-old graduate is pursuing a master’s degree. She did not quit her studies even though she has been active in various modelling projects and competitions even before she became Miss India 2021. Miss Universe 2021 Harnaaz Kaur Sandhu's Winning Answer at The Pageant: Watch Video of Miss India From Question-Answer Round That Helped Her Win The Crown.

The diva also holds multiple pageant titles to her. Before winning the Miss Universe crown 2021, she was the Times fresh face Miss Chandigarh 2017.  She won the title for Miss Max Emerging Star India in 2018 and after which she became Femina Miss India Punjab 2019. The beauty pregnant is very fond of food, but at the same time has an impressive fitness regime. She enjoys cooking, acting, horse riding, dancing, singing, and yoga.

She gave her first stage performance during a show in college in the year 2017, which was the beginning of her modelling career. Sandhu has two Punjabi films in her kitty, 'Bai Ji Kuttange' and 'Yaara Diyan Poo Baran,' that will release next year.

The beauty queen made it to the top 3 after her powerful answer, calling for less talk and more action. Apart from her fabulous look she also impressed the panel with her wise answers.  During the final round of the competition, Harnaaz spoke about Climate change and the adverse effects of Global Warming. She said, "One day, life will flash before your eyes, make sure it's worth watching. However, this is not the life you want to watch, where the climate is changing and the environment is dying. It is one of the fiasco that us humans have done to the environment. I do believe that we still have time to undo our irresponsible behaviour. Earth is all we have in common and our small acts as individuals when multiplied by billions can transform the whole world. Start now, from tonight, switch off those extra lights when not in use. Thank you."

(The above story first appeared on LatestLY on Dec 13, 2021 09:36 AM IST. For more news and updates on politics, world, sports, entertainment and lifestyle, log on to our website latestly.com).