Republic Day 2019: Know all About Tiranga and Importance of the Three Colours and Dharma Chakra in the Indian National Flag

Do you know, each shade on the Indian flag represents a certain aspect of the country? 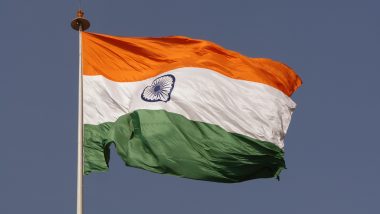 After 200 years of struggle for independence,  India finally achieved freedom from the British Raj on 15th August 1947 under the able guidance of leaders such as Mahatma Gandhi. Despite achieving independence, the nation did not have a constitution. So Dr B.R Ambedkar drafted the first set of fundamental principles and laws of the state and the Indian constitution came into effect in 1950. From the time of Independence, the colour of Indian flag remained same i.e saffron, white and green with Dharma Chakra in the centre. But do you know, each shade on the flag represents a certain aspect of the country?

The national flag of India is a horizontal rectangular tricolour (Tiranga) of saffron (Kesari) colour at the top, white in the middle and dark green at the bottom in equal proportions. The flag also consists of Dharma Chakra in the centre. Republic Day 2019 Speeches: Best Quotes That You Can Use to Make Your Speech Patriotic (Watch Video).

What Do The Three Colours Signify?

The deep saffron colour in the national flag holds the top position. It stands for courage and selflessness. The Kesari is also religiously significant for Hindus as it stands for renunciation and absolution of the 'Ego'. It also stands for the courage of those soldiers who dedicate their lives to their heartland. Best WhatsApp Stickers, GIF Image Messages, Patriotic Quotes, SMS to Send Happy Republic Day Greetings.

The white colour in the flag stands for honesty, peace, and purity. It is also a sign of knowledge and cleanliness. The white band indicates peace and truth with Dharma Chakra in the middle. It also gives a message that every citizen should live in harmony.

The last stripe green in colour shows the fertility, growth and auspiciousness of the land. The green colour is also a sign of success and happiness. 12 National Symbols of Incredible India & Their Importance That You Should Know.

The Dharma Chakra in the middle depicts the "wheel of the law" in the Sarnath Lion Capital made by the 3rd-century BC Mauryan Emperor Ashoka. The chakra intends to signify that there is life in movement and death in stagnation.

This is what each colour in the Indian Flag represents. There is a lot of thought that went into the design of our national flag, which we fondly call the tiranga. Know that you know the story of the flag, sing 'Vijayi Vishwa Tirangaa Pyaara! Jhanda Ooncha Rahe Hamara' with more pride than ever this Republic Day!

(The above story first appeared on LatestLY on Jan 24, 2019 10:53 PM IST. For more news and updates on politics, world, sports, entertainment and lifestyle, log on to our website latestly.com).