Decreased Mask Use, Waning Immunity For Those Vaccinated Trigger For Increasing COVID-19 Cases in Northern Hemisphere

Many countries in Western Europe are even farther ahead of the US in the sense that numbers are going up quite quickly in places like the Netherlands or Denmark as also in Germany and a number of other countries, IHME said. 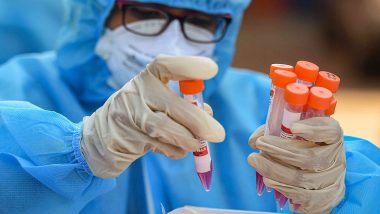 New Delhi, Nov 6: The rising Covid numbers in the Northern Hemisphere are due to winter seasonality, waning immunity for those vaccinated, decreased mask use and increased mobility levels.

At the global level, clearly the declines that the world was seeing which began in late August-early September for infections and then by mid-September for cases and deaths have essentially stopped, and we're starting to see at the global level flattening and actual reversals, according to the Institute for Health Metrics and Evaluation (IHME). Gene Common in South Asians May Double Risk of COVID-19 Death, Say Oxford University Scientists

IHME is an independent global health research centre at the University of Washington.

"Covid is not over as some people seem to think it is, and in fact we expect that we're entering a phase where we will have to pay more attention to Covid, certainly over the Northern Hemisphere winter," it said.

IHME in a forecast on the Covid pandemic said there is increasing evidence in the Northern Hemisphere that the expected winter surge has started to unfold. Reductions in cases, estimated infections, and hospitalisations have essentially stopped in the US, and are starting to turn around.

Many countries in Western Europe are even farther ahead of the US in the sense that numbers are going up quite quickly in places like the Netherlands or Denmark as also in Germany and a number of other countries, IHME said.

The general pattern of rising numbers is due to the three things coming together in the Northern Hemisphere: Winter seasonality, waning immunity for those who got vaccinated – more evidence that vaccine-derived immunity for protection against infection does wane quite considerably by six months – so there are many people who were vaccinated early in the Northern Hemisphere who are now likely susceptible to the disease.

The third factor that's fuelling these winter increases is the fact that people are much less cautious than last winter, as mask use is much lower. Currently, it is below 40 per cent in the US – slightly higher than that in Europe, but much lower than a year ago.

"Putting these together, we expect that despite progress on vaccination, we will see a winter surge. The question really comes down to how big will that Northern Hemisphere winter surge be. In our current models, it's a relatively modest surge, nowhere near as large as last year but still enough to put great pressure on hospitals when they have the combination of expected flu cases as well as Covid-19 (but much less than last year)," IHME director Christopher J.L. Murray said.

"Elsewhere in the world, we see increasing transmission, although it's not dramatic in many regions. For the first time we're seeing either flattening trends or slight increases in transmission in a number of countries in South America, although they're heading into summer in the southern parts of South America. Also, we're seeing increasing transmission in some parts of Southeast Asia. Clearly, we think those increases are driven mostly by behavioural relaxation, as people are just not as careful anymore and that is likely the main driver," IHME said.

(The above story first appeared on LatestLY on Nov 06, 2021 11:23 PM IST. For more news and updates on politics, world, sports, entertainment and lifestyle, log on to our website latestly.com).