World Blood Donar Day 2018: All You Need to Know About Blood Donation 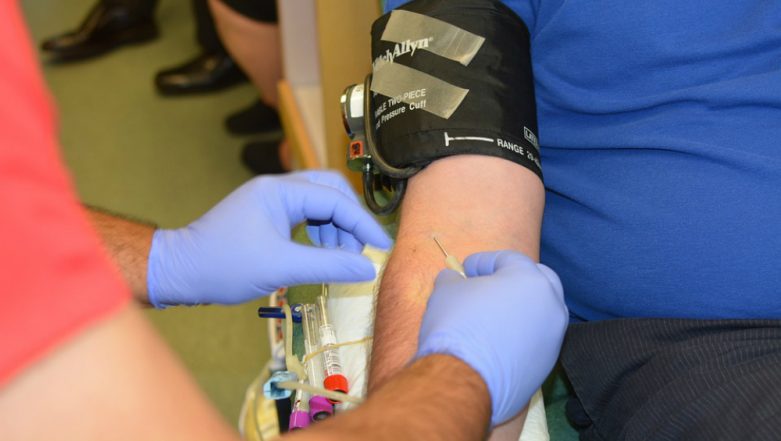 New Delhi, June 14: The phrase 'every drop counts' applies not just to water, but to another aspect of human life as well - blood donation. It is a noble act and one should donate blood at least once a year. Apart from the obvious benefits it has for the recipient, donating blood regularly, according to various reports, can reduce the chances of future heart attacks. It helps stimulate the production of new blood cells in the body of the donor thus helping a person stay healthy for a longer time. Regular blood donation also prevents the buildup of excess iron in the body, if present, and averts conditions like hemochromatosis.

Despite such a huge population, there is a deficit of about 12 lakh units of blood in the country. "There is one person in need of blood every two seconds including those with cancer patients, various blood disorders, etc. They either require blood or any of its components to be transfused regularly. Apart from this, there are pregnant women with complications and those who have undergone surgery as well. Donated blood is often separated into its basic components: RBCs, plasma, and platelets for specific use as per patient requirements," said Dr M Udaya Kumar Maiya, Portea Medical.

The shortage of blood and the fact that many people still do not choose to donate can be attributed to a lack of awareness about its benefits, especially for the donor. Educating people on these things can help encourage more people to come forward to donate blood on a regular basis.

"There are more than 512 million eligible donors in India. Geographically, the stats are heavily lopsided with a few states like Maharashtra, Kerala, Delhi, and Punjab faring well while some under-developed states such as Chhattisgarh and Bihar face a severe deficit. This shortfall can be mainly attributed to lack of awareness about the subject. Besides, the 1995 ban on blood donation against payment has sent a wave of disinterest among many poor donors who used to use it as a means of earning money," added Dr Ramananda Srikantiah Nadig, healthi.

Here are the conditions in which you can donate blood: