National Alaska Day 2022: From Kenai Fjords National Park to Inside Passage, 5 Attractive Tourist Attractions of the Largest State of The US

Alaska is not just the largest state, but also home to the highest mountain peaks in the country. The origin and founder of National Alaska Day remains unknown but all we know is that Alaska became a U.S state in the 19th century. 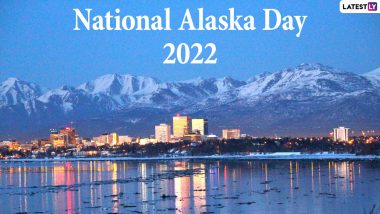 National Alaska Day is observed every year on June 28. This day recognises the largest state to join the union and the Nation’s Last Frontier. Alaska is not just the largest state, but also home to the highest mountain peaks in the country. The origin and founder of National Alaska Day remain unknown but all we know is that Alaska became a U.S state in the 19th century. As you celebrate National Alaska Day 2022, we at LatestLY, have curated a list of 5 top tourist attractions you must visit in the state. Know All About Polar Nights That Brings Near-Darkness in This American Northernmost Town

Denali encompasses North America’s highest mountain range and is the third-largest national park in the United States. It has photogenic landscapes like wide river valleys, tundra, high alpine ranges and glacier-draped mountains. It is home to more than 167 species of birds and also to grizzly bears, wolves, reindeer, elk and other animals.

This National park offers some of the best sightseeing spots in Alaska. It offers beautiful panoramic landscapes and is home to large brown beers that feed on the fat-rich salmon.

The most popular way to visit inside Passage in southeast Alaska is to cruise through the fjords on large ships, charter boats and private yachts. The Tongass National Forest along the coastal passage covers 17 million acres and includes islands, mountains, glaciers, ice fields, fjords and waterfalls. This forest also includes the largest island in the U.S known as the Prince of Wales Island.

This highway stretches over 400 miles into the far north region of Alaska and gives a view of the beautiful Northern Lights at night during September and mid-April. The highway also crosses into the Arctic Circle where the summer solstice brings 24 hours of daylight and winter means 24 hours of darkness.

5. Museum of the North

The museum offers more than one million historical artefacts and natural history pieces along with a collection of the permanent collection of fine art that focuses mainly on Alaskan art. It also features archaeological finds from prehistoric cultures, an assemblage of birds and several palaeontology specimens.

Alaska itself covers more total area than the three largest States, Texas, California and Montana combined. It is the third least populous and the most sparsely populated state. Celebrating National Alaska Day 2022, you must try to know more about the above-mentioned tourist attractions of the state.

(The above story first appeared on LatestLY on Jun 27, 2022 12:26 PM IST. For more news and updates on politics, world, sports, entertainment and lifestyle, log on to our website latestly.com).