23-year-old Aishwarya Sridhar has become the first Indian woman to win the Wildlife Photographer of the Year award. Her award-winning photo won among 50,000 entries from over 80 countries across the world. The announcement was made on October 13 at the Natural History Museum in London. She won the award in the Behaviour Invertebrates category. 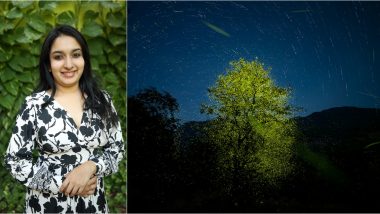 23-year-old Aishwarya Sridhar from Panvel has become the first Indian woman to win the Wildlife Photographer of the Year award. Her award-winning photo won among 50,000 entries from over 80 countries across the world. The announcement was made on October 13 at the Natural History Museum in London. Only 100 images were shortlisted and she won the award for her photograph in the Behaviour Invertebrates category. It is the 56th year of the prestigious award. The image is named 'Lights of Passion; and was captured using one of Canon’s premium DSLRs -- EOS-1DX Mark II. Sergey Gorshkov Named 2020 Wildlife Photographer Of The Year: 'The Embrace' Rare Photo of Siberian Tigress Hugging Tree Wins the Award (See Picture)

For the photograph, she was using a 35mm lens for this shot or Canon EF16-35mm F/2.8 L II USM lens to be precise at a focal length of 24mm, a shutter speed of 24 seconds and an f/2.8 aperture and ISO 1000. Along with being a wildlife photographer, she is also a writer and filmmaker by profession. Aishwarya is a Mass Media graduate from Pillai College of Arts, Science And Commerce. The photo was shot during a trek in Bhandardara in June last year. Check Award-Winning Photos Showcasing the Best of Wildlife and Nature.

Aishwarya Shridhar Took To Twitter About Winning the Award:

A big moment for India and for me as a young wildlife photographer. Being the first and youngest girl to win this award from India in the Adult category, its a huge honour for me to receive this award !!

Thank you to the entire Jury and WPY team. https://t.co/i6mU8VKW4j

Congratulating the winner, Mr C Sukumaran, Director, Consumer System Products & Imaging Communication Products was quoted as saying, "We are delighted to hear the news of Aishwarya becoming the first Indian woman to win at the 56th Wildlife Photographer of the Year in the adult category which witnesses touch competition year on year. We want to congratulate her on her win and hope to witness her winning many more such awards in the future." Awkward Yet Adorable Photo of Lion Cub Wins The Funny Animal Photo Contest.

In the past too, she has won awards for her photography. Her documentary Queen of Taru won 9th Wildlife Conservation Film Festival in New York. She is also a conservationist.

(The above story first appeared on LatestLY on Oct 18, 2020 06:17 PM IST. For more news and updates on politics, world, sports, entertainment and lifestyle, log on to our website latestly.com).