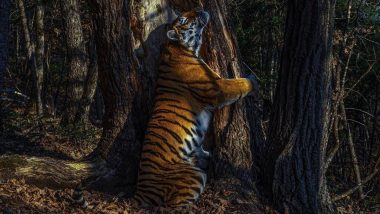 A brilliant photograph of a Siberian tigress hugging a fir tree has won this year’s Wildlife Photographer of the Year competition. At the 56th annual competition, Sergey Gorshkov has been named as this year’s Wildlife Photographer of the Year. The photo 'The Embrace' is of an Amur tigress hugging an ancient Manchurian fir in the Russian Far East. Sergey's image was selected from over 49,000 entries from around the world. It also won the Animals in their Environment category. The photo was chosen from among a number of stunning wildlife photographs of which was a Polar bear in an ice-rink show and a snow-capped peak against the sunset. Check Award-Winning Photos Showcasing the Best of Wildlife and Nature.

In this photo, the tigress is seen rubbing her cheek against bark to leave secretions from her scent glands. The photo was clicked at Leopard National Park, in the Russian Far East. An Amur, or Siberian tiger is considered as the same subspecies as the Bengal tiger. The exhibition of the photographs will open on October 16. The exhibition will then tour across the UK and internationally to venues in countries including Australia, Canada, Denmark and Germany. The museum will let only a limited number of visitors following all safety guidelines during COVID-19 to ensure it is a "safe and welcoming experience" to view the photographs in a crowd-free gallery. Photographer Waited for Four Years to Get the Perfect Shot of an Underwater Eurasian Beaver but the Viral Photo Gets Trolled Instead!

Photo of Tigress That Won the Award:

Wildlife Photographer of the Year is developed and produced by the Natural History Museum, London. Her Royal Highness, The Duchess of Cambridge, Patron of the Museum, announced Sergey Gorshkov as the grand title winner during an online awards ceremony live-streamed from the Museum on 13 October. Sergey knew the chances of getting the tiger on his lens was not an easy task. Amur or Siberian tigers are only found in the Siberian homeland and it took him more than 11 months to click the photo. He installed his first camera trap in January 2019 checking scent, hairs, urine or scratch marks.

Rosamond Kidman Cox, chairwoman of the judging panel describing the image said, "Shafts of low winter sun highlight the ancient fir tree and the coat of the huge tigress as she grips the trunk in obvious ecstasy and inhales the scent of a tiger on resin, leaving her own mark as her message. It’s also a story told in glorious colour and texture of the comeback of the Amur tiger, a symbol of the Russian wilderness." Other winners include 13-year-old Liina Heikkinen, who won the Young Wildlife Photographer of the Year title for a photo she took during a holiday in Helsinki, Finland. It is of a fox cub trying to eat a barnacle goose in a rock crevice keeping its hungry siblings away.

(The above story first appeared on LatestLY on Oct 14, 2020 08:12 PM IST. For more news and updates on politics, world, sports, entertainment and lifestyle, log on to our website latestly.com).