Alabama Man Wakes up to Find an Alligator Chilling in His Pool, Watch Viral Video! 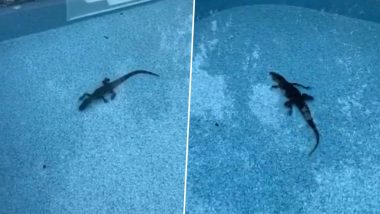 In this lockdown, we have read of so many reports of animals coming out in the open, being spotted in residential areas. Everyone called it as nature is healing and animals taking over as humans stayed in. Now a video from Alabama is going viral after a man woke up to an unexpected visitor. An alligator was swimming in his pool and thankfully he didn't just go and take in a dive. Steven McCulland of Mobile, west in Alabama captured a video of an alligator chilling in his pool like it was her regular habitat. The video is now going viral on social media. Florida Woman Heard Knocks on The Door, Freaked Out to See 10-Foot Alligator Waiting Outside! Watch Video.

The video was taken on July 31. And Steve was obviously shocked to see the alligator having its own pool time. "How is there an alligator in my pool? What in the blue blazes is this?" he can be heard saying in the video. He even said to those watching that if they have any pet alligator then they may come to get him. He told a new report that he called the animal control and a wildlife agent removed it. He also said, "I took my glasses off and looked around made sure I was seeing what I thought I was seeing and I was." He had no idea how and where the alligator had come from.

Not something you wanna see in your pool. 😳 Video taken this morning in West Mobile by Steve McCulland. @spann pic.twitter.com/0PaZFKO1f1

The reptile looks so comfortable, having its own pool time at ease right? Thankfully, it was safely rescued by the wildlife officials. This reminds us of another similar incident from Florida two years ago. A huge 11-foot alligator broke through the pool’s screen enclosure and was seen dipping in the swimming pool. Recently, a sergeant also fought off an alligator to save his pet from being killed by the giant reptile. Alligator sightings in Florida are quite common.

(The above story first appeared on LatestLY on Aug 03, 2020 01:20 PM IST. For more news and updates on politics, world, sports, entertainment and lifestyle, log on to our website latestly.com).