Amul Topical Ad ‘STik With This STok’ After TikTok, WeChat and Other Chinese Apps Get Banned In India is Savage AF! ROFL Over #TiktokBannedInIndia Funny Memes 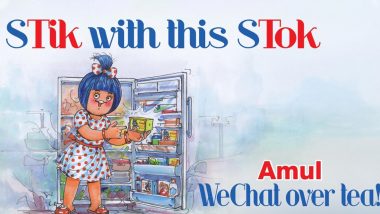 The Indian government banned TikTok among 59 Chinese applications, and people just cannot get over it. The centre’s decision has impressed a majority of citizens in the country, especially its ban on TikTok, the app which has widely been in debate in recent times. As the government announced the ban to 59 Chinese apps citing reports about the misuse of those apps for stealing and transmitting users’ data in an unauthorised manner to servers outside India, netizens began to flood Twitter and other social media platforms with their reactions. Amul, India’s largest food production organisation as well did the same. ‘STik with this STok,’ Amul’s latest and savage topical ad on the TikTok, WeChat and other Chinese app was quick to go viral on social, impressing Twitterati. If you haven’t seen the ad picture yet, scroll down to see, why it the topical ad is savage AF and also ROFL at these #TikTokBannedinIndia funny memes. #RIPTikTok Funny Memes Flood Twitter: Netizens Bid Farewell With Jokes and Hilarious Reactions As the Chinese App Completely Goes Offline in India.

The topical ad shared on Twitter, creatively plays with the work ‘TikTok’ to incorporate the phrase, ‘STik with this STok.’ The famous Amul girl can be seen holding a pack of butter with the background of the open fridge that has all the required stock. Another highlight of the topical ad is ‘WeChat over tea,’ where they sarcastically took a jibe on the Chinese messaging app, ‘WeChat’ that is another app among the 59 being banned in the country. Sharing the topical ad, Amul captions the tweet, “#Amul Topical: New Delhi bans 59 Chinese apps!” TikTok Ban Sparks CarryMinati Funny Memes and Jokes Online: Netizens Believe Ajey Nagar Must Be the Happiest Man RN After the Chinese App Is Banned! Hilarious Posts Go Viral.

The government’s decision to ban the app was supported by a significant number of the population who celebrated with memes and funny reactions. So, when Amul shared its savage topical ad, it was only natural to impress the netizens on Twitter. Check out the reactions on #TikTokBannedinIndia tweets.

Me: what's your hobby?

Great work done by our pm... we are happy to knw that 59 chinese apps got kicked out of india.. the most happiest thing is tiktok is in the list.. aur kya haal hai tiktokers?? 🤣 #TiktokBannedInIndia pic.twitter.com/n8hzl02dOu

Amul is known for its topical subjects grabbing headlines and has been quite vocal about its support to the government’s decision. Previously, the diary brand went creative with ‘Exit the Dragon’ topical ad after PM Modi appealed for Aatmanirbhar Bharat.

(The above story first appeared on LatestLY on Jul 01, 2020 10:46 AM IST. For more news and updates on politics, world, sports, entertainment and lifestyle, log on to our website latestly.com).