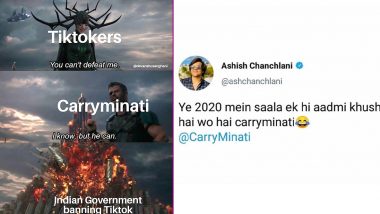 Last night the Indian government revealed a list of about 59 Chinese apps that will soon be removed from Google Play Store and Apple store including TikTok, Shein, UC Browser and Shareit. Ever since the announcement, for obvious reasons, CarryMinati has been on Twitter's trending page. CarryMinti's hate for TikTok is quite well-known. His YouTube vs TikTok roast video took India by storm after he ridiculed the video making and sharing app and especially TikTok creator Aamit Siddiqui. However, people cannot stop sharing memes and jokes about how happy CarryMinati might be now that the government of India has decided to ban TikTok. CarryMinati Mercilessly Roasts Another TikToker Nisha Gurgain! YouTuber Ajey Nagar's Video Goes Viral.

2020 has particularly not been great for TikTokers. First receiving tonnes of hate from Youtubers after CarryMinati made the YouTube vs TikTok: The End roast video filled with profanity, homophobic slurs to put them down. Soon after that, the bad apples of the Indian cringe TikTok were exposed who made videos that glorified rape and abuse. More and more people began vouching for TikTok ban and now finally the Chinese app name to top the list of soon-to-be banned by the govt. is TikTok. However, CarryMinati surely must be the happiest person right now because he got exactly what he wanted. We are not saying this, but the netizens are. Check out some of the best CarryMinati hates TikTok memes and jokes that are going viral on social media:

Finally #TikTok is not in playstores, Now #carryminati be like pic.twitter.com/18yJtGqX8F

After seeing #TikTok banned with 59 others..🤣🤣 pic.twitter.com/OpboTvQM4e

If you open TikTok app, you'll see some of the most amazing Indian content creators on TikTok bidding goodbye to their fans. They have urged people to support them on Instagram and YouTube. The Government of India issued the order to ban the usage of TikTok, UC Browser. ShareIt, YouCam, Shein, Romway and other popular Chinese apps in India. A total of 59 mobile applications, developed by companies based in China, have been banned that Google Play Store and Apple's App Store would no longer allow Indian users to download.

(The above story first appeared on LatestLY on Jun 30, 2020 09:04 AM IST. For more news and updates on politics, world, sports, entertainment and lifestyle, log on to our website latestly.com).