Asteroid & Doomsday Funny Memes and Jokes: Check out Hilarious Posts About The Monster of a Year That 2020 Is Because You Deserve It! 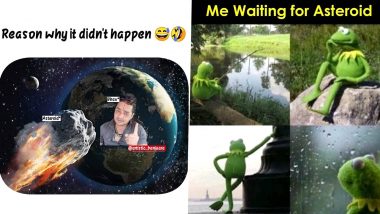 This year truly has been throwing curveballs at us like it is nobody's business. One after the other we have legit dealt with asteroids, pandemic, doomsday, locust attacks, murder hornets, and only God knows what else is in store. But it the conspiracy theorists that have scared the life out of us in this monster of a year that 2020 is. Asteroids and doomsday predictions were really terrifying although fortunately, we were all safe. However, it is during times like this that funny memes and jokes provide us respite. Some of the funniest doomsday and asteroid memes and jokes have gone viral on social media and you might want to check them out!

Every year on July 30, International Asteroid Day is observed. It is a rather serious commemoration by the United Nations General Assembly in order to "observe each year at the international level the anniversary of the Tunguska impact over Siberia, Russian Federation, on 30 June 1908, and to raise public awareness about the asteroid impact hazard." Thankfully, this year the asteroid that was predicted in the month of April and doomsday predicted for the month of June didn't happen but we really could use some positivity. Scared of Doomsday? Positive Quotes and Motivational Sayings to Beat 'End of the World' News Blues and Look Toward Better Future.

But nothing compares to funny memes and jokes when it comes to LOLing and getting rid of all the stress. So you might want to check out some of the funniest asteroid and doomsday memes and jokes:

If you want to read more about International Asteroid Day that aims to raise public awareness about the asteroid impact hazard and to inform the public about the crisis communication actions to be taken, you might want to read the theme, history and significance of Asteroid Day.

(The above story first appeared on LatestLY on Jun 30, 2020 09:00 AM IST. For more news and updates on politics, world, sports, entertainment and lifestyle, log on to our website latestly.com).