A woman enthralled people on social media, as she discovered a whole apartment behind the bathroom mirror in her New York City Apartment. She inspected after experiencing a creepy breeze in her bathroom and decided to figure out its source. 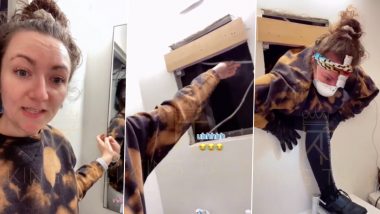 Oh my, what just happened? A whole ‘secret’ apartment behind a bathroom mirror! Well, is that how creepy stuff is made of? Mirror, mirror, on the bathroom wall, is this NYC apartment, the creepiest of all? A woman enthralled people on social media, as she discovered a whole apartment behind the bathroom mirror in her New York City Apartment. She inspected after experiencing a creepy breeze in her bathroom and decided to figure out its source. The woman's video exploring the apartment will give you scary chills and may make you check your own bathroom mirror, before you sleep tonight!

New Yorker, Samatha Hartsoe, experienced a whole new freaky tenant story, when she found an entire apartment accessible through a tiny hole hidden behind her bathroom mirror. Hartsoe documented the horror saga, in a series of TikTok video, the findings of which are everywhere on social media now. She shares her three-bedroom apartment on Roosevelt Island with two roommates. The 26-year-old noticed that her bathroom was freezing, a place with no outside windows, and so. It is weird for her, until she finally saw the draft was coming from the mirror over the sink. Man Living Alone Captures 'Ghost' in His Home After Hearing Strange Noises.

When she lifted the mirror, she discovered a hole in the wall that led to another room. She expressed her concern that someone may be living in the hiding room, prompting comparisons to Parasite, or the horror film, Candyman. Hartsoe called her friends to come over for back up, before she finally decided to climb right through the hole and look around. Tying a torch to her head and armed with a hammer for self-defence, she climbed through the tight space to explore whatever nightmare was hidden on the other side. Is That a Real Ghost? Father Shares Horrifying Video of Daughter Being ‘Pulled’ Under Bed by Paranormal Being.

LOOK AT WHAT SHE FOUND IN HER NYC APARTMENT pic.twitter.com/gmU3w5jRxU

The video shows, how Hartsoe discovered not one room, but an entire empty apartment, with constructions debris, and trash bags scattered over the floor. Most worrying of all was the unlocked main door, which she quickly dealt with by securing the latch on the inside. Hartsoe finally explained that she would be cementing her mirror onto the wall, and inform her landlord about her creepy finding.

(The above story first appeared on LatestLY on Mar 05, 2021 02:54 PM IST. For more news and updates on politics, world, sports, entertainment and lifestyle, log on to our website latestly.com).