The Buddhist monk tried to nudge it away several times, but the cat continued to rub against, climb over him and get his attention until he finally petted her. Video of this cat's antics has been shared on social media and it is going viral. 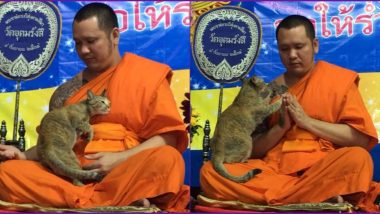 Cats can be really naughty sometimes, especially when they are in the mood to play. At other times they do not like to be disturbed but its time for some rubs and play, they ensure they get the attention. Similar behaviour of a feline has been captured on camera at Bangkok's Wat Udomrangsi temple. During the New Years, the monks were engaged in almost five-hour-long prayers, which require a lot of concentration and patience. But this cat, who is a regular visitor at the temple was successful in disturbing a monk chanting his prayers. The Buddhist monk tried to nudge it away several times, but the cat continued to rub against, climb over him and get his attention until he finally petted her. Video of this cat's antics has been shared on social media and it is going viral. Katryn, The Cat Who Adopted Four Puppies After Losing Her Kittens and Grieving for Days, Goes Viral For Nursing and Sleeping With Them (Watch Video).

As per reports, the incident took place on New year's Eve when the monks were busy praying. But just about 15 minutes to midnight, the feline came up on stage and start disturbing one of the monks named Luang Pi Komkrit Taechachoto. Draped in a saffron-coloured robe, he was reading from the scriptures until the cat decided to step on them. The feline then reached on his lap and started playing. He tried to nudge it away but to no avail. In fact, the cat's actions even got the attention of a senior monk who was seated right night to him. Taechachoto told Reuters, "I was trying to read the book. But I was more focused on the cat." He eventually gave in to the feline and petted her. Cat Catches Partner Cheating With Other Feline and Its Reaction Is Straight Out of an Indian Daily Soap! Watch Viral Funny Video.

Haha, isn't it cute? Sure, the cat wants what it wants and managed to get it. Thailand has a lot of cats roaming around freely and this particular monastery is home to almost a dozen stray cats. So we assume the monks would be used to have cats walk around as they sit to meditate. The devotees who visit here also feed them.

(The above story first appeared on LatestLY on Jan 05, 2020 06:45 PM IST. For more news and updates on politics, world, sports, entertainment and lifestyle, log on to our website latestly.com).