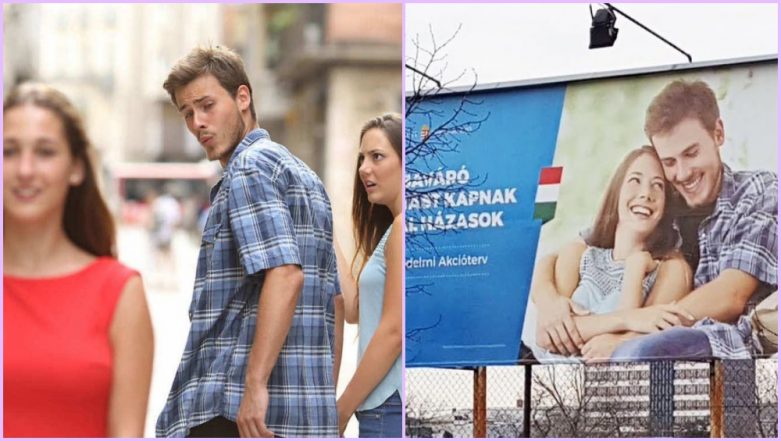 The Distracted Boyfriend meme that hit in 2017, continues to gain popularity. Thanks to the generic looking and object labelling style that allows people to project endless opinions and scenarios onto the three people in the meme. The increasing popularity of the meme made its models' easily recognisable stars to all of them who spends almost any amount of time online. But who would have ever imagined the models’ popularity will make them the face of a billboard campaign; ironically to promote families? Yes, the Hungarian government has launched a public campaign to encourage couples to have more children, and they choose the same pair who appears in the distracted boyfriend meme. Social media users are amused by choice of the couple to endorse family values. Charlie Chaplin Invented The Distracted Boyfriend Meme.

The popular meme is based on a stock photo of a man who is walking with his girlfriend while being distracted by another attractive woman. It was captured in Catalonia, Spain in mid-2015 by Spanish photographer, Antonio Guillem and it eventually became meme-makers' favourite. The couple has become synonymous with two people who have issues to work on their relationship. In fact, the Swedish government called the meme “sexist.”

The happy couple gracing the Hungarian government’s campaign advertising its new family policy is already famous on the internet...and not for being madly in love. pic.twitter.com/wBljm6eiF7

The Hungarian Prime Minister Viktor Orbán has decided that the country needs young people to give birth to more Hungarian babies. And what could be the better way to promote family life than showing two young people cuddling on a couch? The English translation of the billboard as reported by several media outlets roughly means, “Young married couples are receiving support while they expect a baby.” 'Distracted Boyfriend' Meme Recreated With Lego by a Photographer.

The public could not take the couple seriously, and we know why. They have roundly mocked the government for using characters from the meme and came out with many hilarious reverts. Distracted Boyfriend Meme Remade With a Delicious Ice-cream!

I See What You Did There

I see what you did there… and I raise it pic.twitter.com/eHYjCjNqdc

The Hungarian government reportedly is passing legislation to incentivise people to start having more babies, and they even have plans for the mothers and expecting mothers. For example; the government have suspended income tax for women with four or more children. But the distracted boyfriend meme couple if not the correct, is definitely a hilarious choice for promoting family life. It’s ever-increasing popularity because of its representation clearly means they might not have been the best choice for a billboard campaign to urge the couple to plan for having more kids. Also, we cannot ignore but raise a question if the distracted boyfriend will be a good father or he will simply transform into a distracted dad!