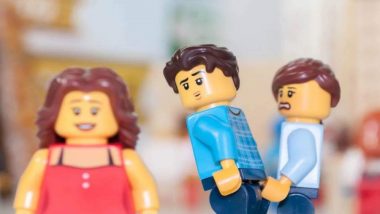 The 'distracted boyfriend' meme was one among the most viral meme trends we saw this year. A picture from a stock photo of a man walking with a woman but turning to look at another woman was made into countless jokes. Now the meme material picture goes one step ahead as it gets itself a lego demonstration by a photographer. Dylan Maithonis has recreated this picture in lego and thus combining his love for the memes, photography and lego combined. Charlie Chaplin Invented The Distracted Boyfriend Meme, Pic Goes Viral Along With New Memes.

Lego just newly launched a boy's face and Dylan found the similarity in it to the distracted boyfriend. Talking about his recreation he spoke to PetaPixel, "I made this shot because the boyfriend’s face piece was newly introduced and I thought it was perfect for recreating the meme. After the inspiration I ordered the rest of the parts off BrickLink, such as the hair pieces, the body pieces and the girl’s heads, to make it look more true to the meme." Check Best Meme Trends That Went Crazy Viral on WhatsApp and Twitter.

Just getting the character faces wasn't enough, he needed to create the city background along with the other passersby in the original image. So he created a tabletop setup, a city-like background and some figures. He then very carefully clicked the picture to give the exact feel to his creation. The original picture was created by photographer Antonio Guillem and uploaded on a stock image platform in 2015, but only the last year did it pick up as a meme trend and soon became viral over few months. Do you like the new creation and form given to the meme picture?

(The above story first appeared on LatestLY on Nov 12, 2018 03:08 PM IST. For more news and updates on politics, world, sports, entertainment and lifestyle, log on to our website latestly.com).