Video has been going viral on social media which shows a dog joining his human as he practices the song on his harmonium. The video has crossed over two million views and people cannot stop gushing over it. 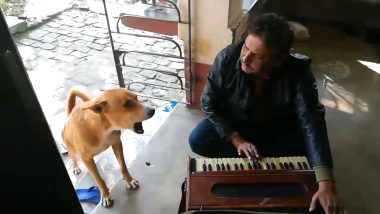 When Ranu Mondal crooned "Teri Meri Kahani" a song from the Himesh Reshammiya film Happy Hardy and Heer, everyone liked it. And now there is a new rendition of the song featuring a stray dog! A video has been going viral on social media which shows a dog joining his human as he practices the song on his harmonium. The video has crossed over two million views and people cannot stop gushing over it, some even calling the dog more talented than the man. Meet Emily, The Singing Donkey From Maharashtra Who Sings Whenever in Mood, Watch Video.

Facebook user Subir Khan has posted the video on his feed which shows a man singing Ranu Mondal's debut song 'Teri Meri Kahani' along with playing his harmonium. Just by his side, is a dog named Bagha howling around. It is funny how the dog, joins along howling as if he clearly understands the music. Ranu Mondal Records Another Song With Himesh Reshammiya, This Time It Is ‘Aashiqui Mein Teri’ Reprise Version & Internet Is Loving It (Watch Video).

Here's The Video of Dog Singing Along With The Owner:

The video has got over 2 million views and 59,000 shares. It was shared by several netizens even on Twitter and other meme pages. Here's how the netizens reacted.

He Was A Singer!

Let him play the damn harmonium 😂😂😂

Now this is called "Jugalbandi"

It is really funny how the dog joins along and at a moment it does feel like he wants to play the harmonium too. Clearly there is more talent in this one. This incident also reminds us, when a video of a dog accidentally crooning Britney Spears' Toxic tune had gone viral. A dog named Riley was squealing one night and it came out as the exact music of the hit track.

(The above story first appeared on LatestLY on Jan 16, 2020 01:07 PM IST. For more news and updates on politics, world, sports, entertainment and lifestyle, log on to our website latestly.com).