A short walk back to his room soon turned into a mountain hike. 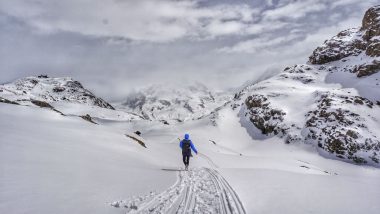 A tourist lost his way after getting drunk and climbed a mountain in the Italian Alps. Estonian tourist known as Pavel walked to the top looking his hotel. The 30-year-old was convinced that his in the right direction and didn't realise the problem. Pavel, after having a few drinks at Cervinia, a resort in Italy's Valle d'Aosta was headed back to his hotel when he lost his way.

A short walk back to his room soon turned into a mountain hike. He didn't realise even when the road took a steep turn, known as the Ventina. It was 2 am and Pavel was still climbing when he thought he would have lost the way. Luckily, he came across a closed restaurant and gave it a try. The bar, named Igloo is situated at an altitude of 2400m on the mountainside.

With just snowy mountains in sight, Palvy decided to spend the night there. The bar's staff discovered a passed out Pavel in the morning on a makeshift bed. Maybe to ensure, he doesn't wake up with a bad hangover, Pavel drank good two bottles of water which were lying next to him.

Meanwhile, fire brigade, police and drones were already in search of him. According to The Independent Pavel will be fined for the act, however, will not be charged. Pavel seems to be quite lucky in his drunken escapade. Last week, an avalanche killed three skiers in the Swiss Alps as they were heading to the Aletsch glacier.

(The above story first appeared on LatestLY on Apr 11, 2018 10:53 PM IST. For more news and updates on politics, world, sports, entertainment and lifestyle, log on to our website latestly.com).