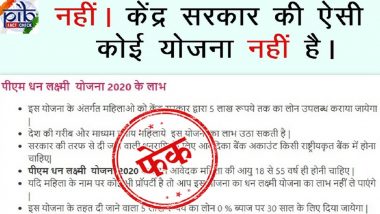 New Delhi, June 12: Women from underprivileged and poor background to be offered a loan of Rs 5 lakh on zero percent interest, claimed a message going viral on various social media platforms. The message, maliciously designed to be projected as a policy design of the Narendra Modi governments, states that the loans are being provided under PM Dhan laxmi Yojana to empower women from weaker backgrounds. Here's a fact check. Centre Planning to Sack 5 Lakh Government Employees? PIB Fact Check Terms Newspaper Report as Fake News.

Claim: Middle class and poor women can reap benefits of the PM Dhan Laxmi Yojana, under which any female aged between 18 to 55 can apply for a loan of Rs 5 lakh. The scheme allows women to return the loan over a period of 30 years, with no interest to be levied.

Further, the messages also state that women owning private properties in their own name would not be considered. Also, the beneficiary must have an account in a nationalised bank.

Fact Check: The news is completely fake, said a statement issued by the Press Information Bureau (PIB) - the official media arm of Indian government. No such policy exists, and the Centre is neither considering any such proposal, it said.

Following the COVID-19 impact on economy, the central government has announced a spree of measured aimed at stimulating GDP growth and reviving small and medium businesses. However, no such scheme for women, as being maliciously circulated through the fake messages on WhatsApp, have been announced. Readers are advised to remain cautious of fake news.

(The above story first appeared on LatestLY on Jun 12, 2020 09:56 PM IST. For more news and updates on politics, world, sports, entertainment and lifestyle, log on to our website latestly.com).