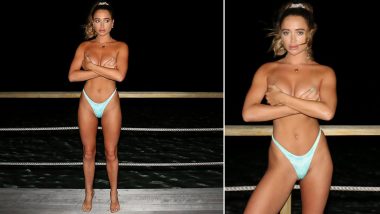 Her ex-boyfriend, Stephen Bear was arrested after being suspected of making a secret sex tape of her without her knowledge. It comes after Georgia posted on Instagram announcing that she will leave the app for a while. She wrote: "Cannot wait until the time I can speak my truth about everything I'm going through… the lies, the heartbreak the deception, the manipulation. Being stripped of my privacy and laughed at. Imagine having young daughters and supporting that sort of abuse on a social platform. How embarrassing. Switching off my phone for a well-needed reset if you need me urgently call my mum or my manager x."

(The above story first appeared on LatestLY on Feb 24, 2021 05:10 PM IST. For more news and updates on politics, world, sports, entertainment and lifestyle, log on to our website latestly.com).