Giant 14-Foot Crocodile Beheaded by Villagers in Indonesia For Being a 'Demon!' (Watch Heartbreaking Video) 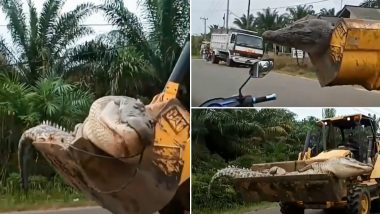 Some villagers in Indonesia recently decided to take matters in their own hands when a crocodile went rogue. A giant 4.5-metre-long crocodile estimated to be around 50 years old had reportedly attacked several people. The incident took place in Bangka Belitung Islands in the country. The villagers not only laid a trap for its capture but also beheaded the reptile and took it off to burial site. The villagers used nets which had razor-sharp blades and put them in the Kayubesi River to catch the giant who they believed was 'evil or a demon.' Crocodile Attacks Swimmer in Bhopal’s Kaliasot Dam! Friend Saves His Life by Poking the Reptile With Selfie Stick, Graphic Footage Will Send Chills Down Your Spine.

Once they got hold of the killer crocodile, it was in captivity for two days and died of exhaustion. And almost half a tonne in weight, they carried it to the burial site in a bulldozer. Authorities tried to intervene to take care of the burial but locals did not want to give it to the conservationists. They considered it bad luck if the crocodile was taken away from the village. They believed that their neighbourhood would be doomed if it was taken elsewhere, and thus had it beheaded! Septian Garo, head of the local conservation agency was quoted in a report, "There was a belief that the crocodile should not be removed from the village because it is a demon. They [referred to] local beliefs that hampered the [animal's] relocation."

Watch Video of Dead Crocodile Being Taken Away in Bull Dozer:

When they reached the burial site, they used a saw to cut down the head from its body. The locals said it was important so that the "demon would not come back to life and haunt them." This is a prominent belief among the locals here which did not let the authorities to intervene. The locals were adamant and gave religious reasons against handing over the reptile to the authorities.  They also made a special ritual before its burial. But it is indeed heartbreaking to see how the people have dealt with the situation and should have just given control to the authorities.

(The above story first appeared on LatestLY on Aug 11, 2020 08:26 PM IST. For more news and updates on politics, world, sports, entertainment and lifestyle, log on to our website latestly.com).