Now, with online passenger train booking going haywire, it gave memers a perfect opportunity to have a field day on the micro-blogging platform, Twitter. And it is not as bad as it sounds. Bringing a faint smile on the tired souls' faces is punya ka kaam. We bring you a collection of IRCTC website down funny memes that should bring some respite. 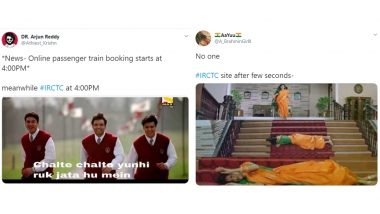 The search engine is flooded with keywords such as IRCTC news, IRCTC special trains and so on. And looks like soon there's going to be another suggestion - IRCTC funny memes! Here's why. Indian Railway Catering and Tourism Corporation (IRCTC) or simply Indian railways ticket booking website irctc.co.in crashed on Monday. Yes, all the people who are stuck in different parts of the country were hopeful of booking tickets at 4 pm on May 11. However, IRCTC website went unresponsive, leaving people in a lurch. What makes it more ironic is that the site crashed on the day the country celebrates National Technology Day. Can you believe it? Now, with online passenger train booking going haywire, it gave memers a perfect opportunity to have a field day on the micro-blogging platform, Twitter. And it is not as bad as it sounds. Bringing a faint smile on the tired souls' faces is punya ka kaam. And we bring you a collection of IRCTC website down funny memes that should bring some respite to passengers who were hoping to book train tickets online. How to Book Online Tickets or E-Tickets on irctc.co.in For 15 Passenger Trains That Will Be Run by Indian Railways From May 12.

Indian Railways on Sunday announced its plans to resume its passenger train services in a limited manner. They said that reservations can be made only via online booking reservation through its official IRCTC website or app from 4 pm on Monday. However, the official website could not sustain as it witnessed heavy traffic and went down for the time being. The Ministry of Railways too took to Twitter to address the problem. They write, "Data pertaining to special trains is being fed in the IRCTC website. Train ticket bookings will be available in a short while. Please wait. Inconvenience is regretted."

Despite the message from the Ministry of Railways, many frustrated netizens slammed them after facing technical glitches. A Twitter user, Sumit Kashyap, who tried booking tickets but failed, writes, "Saw media reports last night that trains would start from 12th... But I tried booking tickets at IRCTC official App, they aren't allowing train booking.... How to book tickets then?" And then there were many who expressed their hard feelings in the best way possible - funny memes and jokes.

No one #IRCTC site after few seconds- pic.twitter.com/71oGBA2Mt1

5. And Those Who Managed To Book Tickets

Everybody to #IRCTC right now. pic.twitter.com/0j3JFaqtln

Me : After failed attempts to book tickets at 4PM and 6PM#IRCTC @IRCTCofficial pic.twitter.com/gdq4NZHBSQ

8. But Not The Lucky Passenger

Earlier, the railways have suspended the passenger, mail and express train services on March 25 amid the nationwide lockdown announced by Prime Minister Narendra Modi on March 24. On Sunday, the Indian Railways announced that 15 pairs of the Special Air Conditioned trains would depart from New Delhi to several parts of the country. It also said that the tickets for these trains could be bought from the IRCTC website and no tickets will be sold on any stations or ticket counters. (Inputs from IANS).

(The above story first appeared on LatestLY on May 11, 2020 08:05 PM IST. For more news and updates on politics, world, sports, entertainment and lifestyle, log on to our website latestly.com).