When Kalpana was 40, the space shuttle Columbia flew for the 2nd time taking seven astronauts to space. The flight took off on January 16, 2003, for a 16-day flight. Kalpana was responsible for conducting different experiments for which she worked 24 hours a day in alternative shifts. 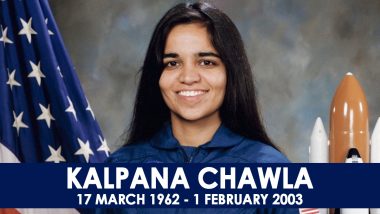 "The Journey matters as much as the goal – Kalpana Chawla"

Kalpana Chawla was born on March 17, 1962, in Karnal, Haryana. But the girl grew up to become one of the dearest daughters of India, who made India proud on various occasions.

She came from a place where education was a luxury for girls at that time. She once said in an interview “ Forget about space, I didn’t even know if my folks were going to let me go to the engineering college.” Kalpana Chawla Birth Anniversary: Political Parties Pay Tributes to The First Woman Astronaut of Indian Origin.

Kalpana’s Journey from Karnal to Space

“Here was this small-town girl in Karnal who dreamt of going into space. She chased her dream. It wasn’t available in the country. She went halfway around the world and went after her dream and grabbed it” – Rakesh Sharma,(February 5, 2003) on Kalpana Chawla

The young mind of Kalpana was always fascinated by aeroplanes and flights. It was her mother who always pushed her hard for her dreams which eventually landed her at NASA and she became the first Indian-born woman to go to space.

After completing her school education, Kalpana graduated in aeronautical engineering from Punjab Engineering College. And when she was 20, Kalpana moved to the US.

Kalpana inspired several in India to dream big irrespective of the place they came from. Before she made it to space, Kalpana was a certified pilot for seaplanes, multi-engine aircraft and was also licensed as a flight instructor for gliders.

At 26, Kalpana joined NASA and worked at the Ames Research Center. Three years later, she got citizenship of the United States which opened the doors for her. She then applied for the NASA Astronaut Corps to participate in US space missions. There, she passed the competitive process and began her training and education as an astronaut.

Kalpana’s Love for India and Her School

Kalpana was a visionary in her field and her love for his school was immense. She helped in organizing a program that allowed two students from her school in Haryana to visit NASA every year.

"It’s a dome of a dark sky and stars everywhere and, the Earth a lot of time covered with thunderstorm here and there with some small sprays of lightning and every once in a while city lights peep through the clouds. It’s very much like a storybook." – Kalpana Chawla shared her thoughts from space

The ultimate dream of Kalpana was to go to space and her first opportunity came when she was 35. The flight STS-87 launched into space with Kalpana and her crew. The observational trip was successful. The Space Shuttle Columbia orbited the Earth 252 times, covering 6.5 Million miles in 15 days 16 hours, and 34 minutes.

The Final Flight for Kalpana

When Kalpana was 40, the space shuttle Columbia flew for the 2nd time taking seven astronauts to space. The flight took off on January 16, 2003, for a 16-day flight. Kalpana was responsible for conducting different experiments for which she worked 24 hours a day in alternative shifts.

“You simply do not have time to dwell on yesterdays because you have to finish the whole mission properly. I think once we get back to Earth we will have a lot of time to talk about this and that’s when I plan to do that”, Kalpana shared her feeling while on the mission but unfortunately, things were not in her hands.

The shuttle wing had got damaged during the take-off. When the space shuttle Columbus re-entered the Earth’s atmosphere, hot atmospheric air entered the damaged shuttle wing. As a result, the shuttle broke apart in which the entire crew lost their lives. Kalpana Chawla’s 16th Death Anniversary: Netizens Pay Homage To the First Female Astronaut of Indian Origin.

The entire world was in shock. But India was remorseful and mourning the loss of her dear daughter. She may not be with us today but her legacy and her journey have inspired millions to aim big and imagine the unimaginable. Today, on her birth anniversary, India fondly remembers its daughter who ignited a fire in little hearts to carry on and achieve big.

(The above story first appeared on LatestLY on Mar 17, 2022 01:40 PM IST. For more news and updates on politics, world, sports, entertainment and lifestyle, log on to our website latestly.com).