Celebrities, sportsmen, politicians and common people all have taken to social media to express pride in the army and salute to those who got martyred in this war. #KargilVijayDiwas, #IndianArmy, #OperationVijay and #KargilWar are among the top trends on Twitter this morning. 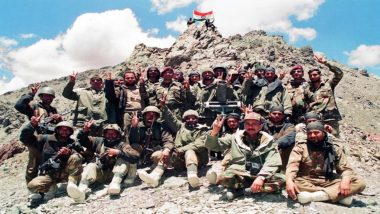 Happy Kargil Vijay Diwas 2020! It is the 21st anniversary of India's victory against Pakistani troops in the Kargil War. A day of immense pride for all Indians, people are paying their tributes to all brave soldiers of the Indian Army who lost their lives in this war. The Kargil War ended on July 26, 1999 after the success of Operation Vijay. Celebrities, sportsmen, politicians and common people all have taken to social media to express pride in the army and salute to those who got martyred in this war. #KargilVijayDiwas, #IndianArmy, #OperationVijay and #KargilWar are among the top trends on Twitter this morning. Kargil Vijay Diwas 2020 Date & History: Know The Significance of Operation Vijay And Celebrations of the Day That Recognises Indian Army's Historic Victory in Kargil War Over Pakistan.

The Kargil war took place from May 3 to July 26, 1999 after Pakistani troops were detected in the Kargil region of Kashmir. The battle saw death on both sides but India emerged victoriously and regained control of their territories. About 527 Indian soldiers sacrificed their lives while protecting the country and Kargil Vijay Diwas commemorates their martyrdom. People have posted messages honouring the Indian Army and given their salute to these Bravehearts. Kargil Vijay Diwas 2020 Messages in Hindi: WhatsApp Stickers, Facebook Greetings, GIF Images, Wishes & Patriotic Quotes to Share Remembering Martyred Indian Soldiers.

Salute to the Armed Forces

Kargil is not a story of just winning. It's a story of Pain with Pride, a story when you will have tears of grief with a joyful smile. A story where death is not THE END. Salute to Indian Army.

Nation remembers with pride, victory in #KargilWar in 1999 and pay homage to #martyrs of #IndianArmedForces who made supreme sacrifices during #OperationVijay to flush out militias & regular troops of Pakistan. #CourageInKargil pic.twitter.com/IWXG2SsCIA

Our flag does not fly because the wind moves it, it flies with the last breath of each soldier who died protecting it,

Respect to The Indian Army

SALUTE & RESPECT to our #IndianArmy! #KargilVijayDiwas celebrates the success of Operation Vijay, on 26 July 1999. pic.twitter.com/rJKTxKOK3s

Angels on The Battlefield

Not all angels reside in heaven

Salute to the Brave Heroes

On Kargil Vijay Diwas, I salute the brave heroes who protect India by dedicating everything.

There a lot of such messages and tweets along with pictures of the victory on Kargil soil. People are expressing with pride and honouring the martyred, saluting the courage of all other soldiers of our army who protect us at the borders each day. Here's wishing everyone with pride a Happy Kargil Vijay Diwas.

(The above story first appeared on LatestLY on Jul 26, 2020 09:28 AM IST. For more news and updates on politics, world, sports, entertainment and lifestyle, log on to our website latestly.com).