Know How to Be a Corona Warrior and Not a Fake News or Hate Virus Carrier! Else, We on Social Media and News Channels Will Bring the Doomsday Soon

Yes, we have to save the world or else sooner or later we will be intoxicated with false information and fake news consumed and forwarded by ourselves. We need to know how to be a Corona Warrior and how not to be a fake news or hate virus carrier! Else, we on social media and news channels will bring the doomsday soon.

Feels like we have seen it all! The year 2020 started with a snail-paced January, a month most of us felt was almost a decade long in itself. From the threat of World War Three due to the killing of Iranian General Qassem Soleimani in US airstrikes to Australia Bushfire and start of Coronavirus pandemic outbreak from China, the world has already got its fair share of scare and discussions of the most notorious and prophetic topic, Doomsday, have started to spread. The latest in the list is the news of a 4-km Asteroid 1998 OR2 said to hit The Earth and cause the end of the world on April 29, a report which has been fact-checked by authorities and NASA several times in the past. With social media and 24x7 news channels and media houses mushrooming around the world, the information attached with panic, fake narrative and hate speeches spreads faster than any virus on Earth.

As soon as there is news or an event happens, social media experts on WhatsApp, Facebook and Twitter get activated with their version of half-baked or fake reports to either support their version of the story or to simply sensationalise the news to get higher engagement. They do not fear or refrain from making or rather twisting the report give communal angle or filled with hate or discrimination against one religion or ideology. Many senseless and heartless memes take over the internet during the times of crises, can you believe there is an actual trend on twitter called #boomerremover! Really what else are we waiting for to witness? Humour is fine but not at the cost of being insensitive. The similar evil efforts are now evident on TV news channels and websites which conveniently carry unverified and hyper-sensational news to keep abreast with the cut-throat TRP competition and attract more eye-balls. While the patients of Coronavirus can be quarantined, fake news peddlers who spread panic and hate virus are not stopping any time soon neither will they put themselves in self-quarantine.

And Yes Media Will Not Disappoint us!

The photoshopped reports, edited videos, manipulated data are affecting the masses who in-turn are spreading more fake news, panic and hatred among fellow humans. A large number of audience are consuming and getting affected by these fake news pieces or half-baked information. We all come across experts from WhatsApp University and Twitter-land daily, who have ample gyan on anything and everything right from international affairs, politics, finance to the deadliest of diseases. While we had encyclopedia during our childhood, the current generation now absorbs knowledge from these social media influencers and news anchors who are nothing more than Jack of all trades, master of none...or just one...Fake News!

Recently, as soon as the news of Coronavirus broke, it broke the internet and broke the flood gates of fake news, photoshopped unverified medical advice, forged and edited government circulars. WHO, PIB in India, Google and other government authorities around the world are trying to control the spread of fake news with their set of fact checks and tools, but still the amount of misinformation, fake news and hatred doing the rounds are dangerous and leading to panic. On twitter trends like #coronapocalypse and corona apocalypse are the result of such reports. While spreading of information is the need of the hour, false information leads to panic and makes the situation worse. We have seen an increase in internet shutdowns across the globe over the past few months. It is a separate topic of discussion whether banning of internet and social media is a violation of human rights or not but it helps in saving mankind from fake news and information at crucial times. I am myself not a huge fan of any restriction on mankind but if someone's action is affecting the other human being, steps and restrictions need to be in place.

From shameful fights due to toilet paper shortage, giving communal angle or blaming one country, religion or ethnicity, to sky-high prices of hand sanitisers, all these show less of awareness and more of panic and in-human behavior. Repeating again, information and awareness is required but not at the cost of panic. While we all should follow the basic hygiene and regular checks to fight against Coronavirus, we should be more cautious while forwarding or sharing any unverified news or information. There is no clarity which government order is correct, verified or not photoshopped. The biggest news agencies are having contradicting reports and claims. Newsflashes come and go, with a clarification later, but the 'screenshot virus' remains active and spreads all over the internet world to be consumed as fake news!

Open or Closed? What will you make out from the below tweets? Clarification comes in after an hour, and it takes a fraction of second to spread the news. These reports are contradicting and pushed to the world to assume which version is true as one news is correct and other is false, but who will filter and quarantine this false news which will spread as 'screenshot virus' and will be consumed by millions? 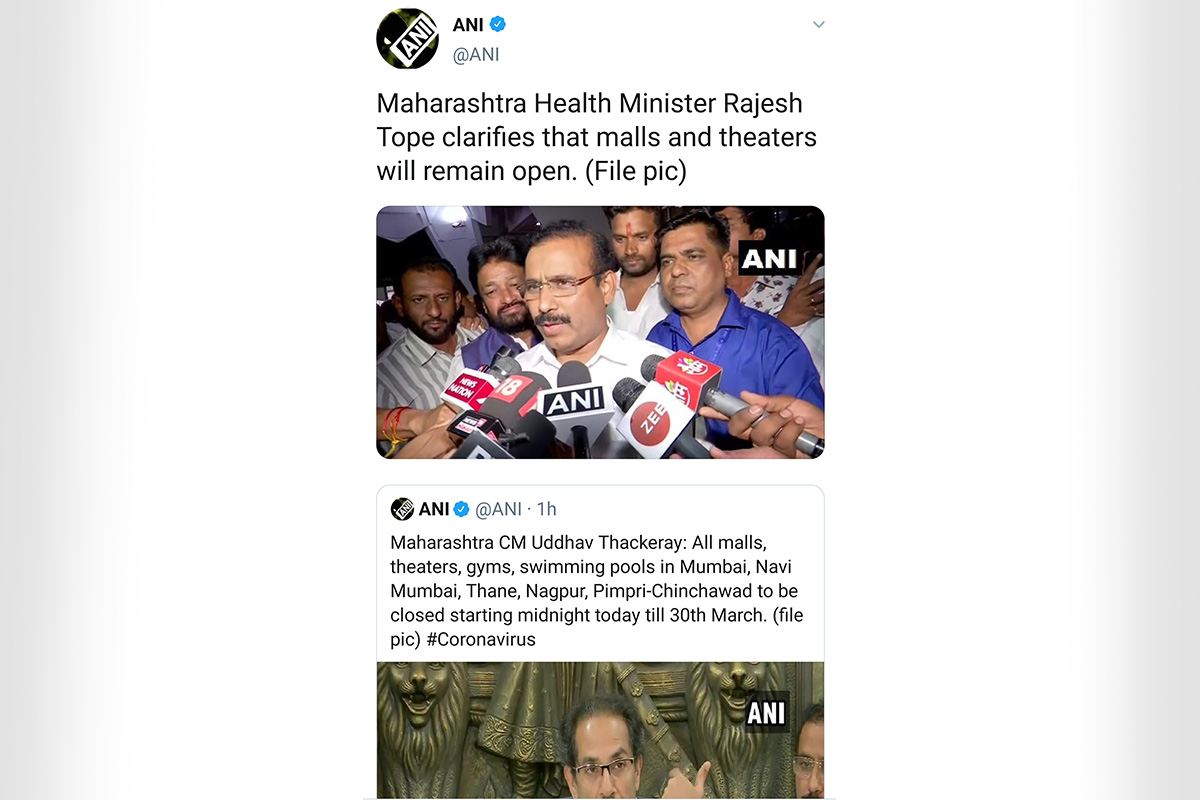 How to save this world? Well, the destroyers are us, so the answer lies within us. Yes, we have to save the world or else sooner or later we will be intoxicated with false information and fake news consumed and forwarded by ourselves. We need to know how to be a Corona Warrior and how not to be a fake news or hate virus carrier! Else, we on social media and news channels will bring the doomsday soon.

There needs to be a stricter screening and filtration of fake news by the platforms and government agencies for sure, but at the end of the day, as said earlier, we are the carriers of these unverified information pieces and fake news, hence, the onus lies with us to know and understand which source of news is credible and authentic. Let us use WhatsApp, Twitter, Facebook etc as pure social media tools to find the well-being of our friends and family rather than using it as your primary news source. Only rely on research reports and not jump to conclusions from breaking news flashes on TV, agenda driven debates by anchors and school of panelists, WhatsApp screenshots and 'Just In' tweets. Pause, read more, don't share anything and everything you receive, read or watch. There are official websites and government agencies active on social media, always go back and verify the authenticity by cross-checking the facts. There are fact-checks sections and websites which you can refer to before coming to any conclusion. Yes, they deny quite a few things too! But chances are less.

If we do not stop trusting on everything and anything on social media and TV news channels in the current scenario, then Doomsday is going to arrive soon and the reason will not be any other Virus, World War 3, Nuclear Weapon or Asteroid, the reason will be the ignorant us who are consuming and spreading the fake news virus daily.

(The above story first appeared on LatestLY on Aug 23, 2021 01:05 PM IST. For more news and updates on politics, world, sports, entertainment and lifestyle, log on to our website latestly.com).