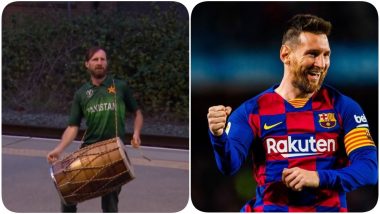 Manchester City appears to be the favourite for signing Barcelona captain Lionel Messi. But here was another Messi who was seen right outside Manchester playing dhol and supporting the Babar Azam and the Pakistani team as they battled against England in Manchester during the third T20i in. The fans on social media went berserk after spotting a lookalike of Lionel Messi as arrived right outside the Old Trafford stadium. The lookalike of Messi was seen wearing a dhol around his neck and was seen supporting the six-time Ballon d'Or winner. PAK vs ENG Stat Highlights 3rd T20I: Haider Ali Scores Half-Century on Debut as Pakistan Beat England by Five Runs, Series Drawn 1–1.

not only has leo messi already reached manchester, he is fittingly playing the dhol celebrating an athlete greater than him. #imad pic.twitter.com/X7r6OEpcmv

Messi spoted with his dhol during the match #PakvsEng #Pakistan pic.twitter.com/WObr1n4A2j

Am I the only one who thinks that this “DHOL WALA” resembles with Messi??

(The above story first appeared on LatestLY on Sep 02, 2020 06:01 PM IST. For more news and updates on politics, world, sports, entertainment and lifestyle, log on to our website latestly.com).