Melania Trump Look-Alike Spotted with Donald Trump? Netizens Share Conspiracy Theories After Smiling Pics of FLOTUS Along with the US President Go Viral

"Fake Melania"? Yes, you heard it right, that is exactly who netizens think was with Donald Trump and not the real First Lady of the United States. Rumours have it that it was Melania Trump's look-alike who was boarding Marine One last week while accompanying Donald Trump. 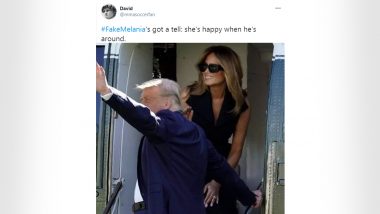 "Fake Melania"? Yes, you heard it right, that is exactly who netizens think was with Donald Trump and not the real First Lady of the United States. Rumours have it that it was Melania Trump's look-alike who was boarding Marine One last week while accompanying Donald Trump. All this because the picture of her with Donald Trump going viral sees Melania Trump smiling from ear to ear which is not very Melania-like! She is known to not have a smiling face, especially when she is with the US president, Donald Trump and this particular picture shows her having a grin like never before. Internet is flooded with conspiracy theories with users wondering if it is a fake Melania with "slight difference in her appearance". Donald Trump and Melania Trump Test Positive For COVID-19.

Here's the picture that is actually going viral:

The only thing I'll miss from this administration is them swapping in new Melanias and just pretending we won't notice like a 4-year-old with a guppy pic.twitter.com/8J0A4E9z5H

Right from the "broad smile" to her expressions and her overall features, netizens thought she was very unlike Melania Trump who is known to give away the "subtle grin" and not very vivid expressions. Yesterday #FakeMelania started trending on Twitter and even today people are sharing conspiracy theories on how the Melania Trump in the new viral image with US president is not actually the First Lady. The picture was reportedly taken on October 22 when the FLOTUS was on her way with Donald Trump to the last presidential debate. Take a look at netizens' reactions:

That is definitely an imposter. She never has a big smile like that and her side profile and jawline are totally different. Wow.... so obvious! 🙄. I wonder how much orange hair paid her for that little stunt.

Is THAT Melania ? Doesn’t look like her smile-teeth. Is this an imposter?

Good luck finding any photos of Melania smiling like that. https://t.co/6pwZTUObDR pic.twitter.com/5dgQKW2S84

#FakeMelania's got a tell: she's happy when he's around. pic.twitter.com/HIX6XTPZzA

This is not the first time it has been accused that Donald Trump was accompanied by a "fake Melania" or a Melania look-alike. A year ago a conspiracy theory took rounds on social media that there exists a Melania lookalike who attends public events in place of the First Lady.

(The above story first appeared on LatestLY on Oct 26, 2020 10:33 AM IST. For more news and updates on politics, world, sports, entertainment and lifestyle, log on to our website latestly.com).