Monolith Mania Continues! Mysterious Metal Monolith NOW APPEARS at Atascadero’s Pine Mountain in California, Is It the Work of Aliens or Pranksters? Netizens Doubt All Possibilities

After Utah and Romania, a third metal slab now has appeared atop Pine Mountain in Atascadero, California. Pictures capturing the strange new monolith is going viral on social media, and is creating quite a buzz, much like the previous findings. 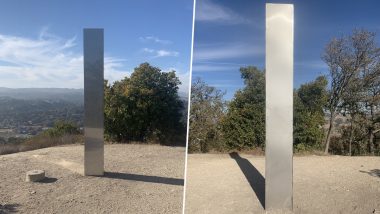 Monolith mania has swept the world. Since the past few weeks, people across are gripped with the updates of monoliths appearing and disappearing mysteriously from different iconic places, without leaving much trace for officials to confirm. Who is behind it? After Utah and Romania, a third metal slab now has appeared atop Pine Mountain in Atascadero, California. Pictures capturing the strange new monolith are going viral on social media, and are creating quite a buzz, much like the previous findings. Is it the same from the one that disappeared in Romania? Or is it the work of men photographed dismantling the structure from Utah desert? Or local pranksters? Or is it the work of aliens? Conspiracy theories stirred up on Twitter and netizens are doubting all sorts of possibilities.

Over the past few weeks, there were many headlines on how monoliths are appearing mysteriously and then getting vanished, without any hint for the officials in the reported areas. Social media, abuzz! First, a giant metal monolith was discovered at a Utah desert. Nine days later, it disappeared. People were confused and were trying to solve the puzzle. Soon, another monolith appeared mysteriously in Romania. It was spotted a few metres away from the well-known archaeological landmark, the Petradava Dacian Fortress and the structure was different from the one in Utah. The monolith in Romania was covered with graffiti, unlike the one in Utah, which had a mirror surface. Within hours, another report came in that stated the monolith in Romania vanished from the sight, without a trace.

Videos and photos surfaced as to who was behind the disappearance of the Utah monolith, and it was humans and not aliens. But the mystery behind the triangular structure in Romania and its vanishing reports remains. Meanwhile, a third monolith, with mirror surface, has been discovered now in Pine Mountain in Atascadero, California. Twitter user, Connor Allen, shared pictures of the monolith that appeared in California. According to a local newspaper, The Atascadero News, the monument that appeared on the mountain was not there until Tuesday, December 1, 2020, a local hiker confirmed in the report.

There is currently a monolith at the top of Pine Mountain in Atascadero!!

No one, not a marketing company, or NASA or pranksters or a movie studio or aliens have come clean as the culprit behind the strange appearance. But netizens had their own doubts and naturally took to Twitter to share all sorts of possibilities.

I suspect something more like the crop circle hoaxes.

3rd one found in recent weeks.... one in Utah, another in Romania.... pic.twitter.com/AZqr1I8aqo

Hey I’m from the future news Can I use your photo in the future we will appreciate it for your capture. Please don’t contact us. We will send signs and signals 👽🛸

The thing that really screams *extraterrestrial origin* are the fingerprints and screws.

I heard it was just alien kids running off with their parents UFO, playing games, I wouldn't worry about it to much.

So now we’re calling it, “The Traveling Monolith Art Show!”

This monolith is made of a stainless-steel like material and is highly reflective. There was no indication of who erected the monolith in California, much like the previous ones. Further reports on the same are awaited. The year is coming to an end, and we have these biggest mysteries to solve before hitting 2021.

(The above story first appeared on LatestLY on Dec 03, 2020 10:17 AM IST. For more news and updates on politics, world, sports, entertainment and lifestyle, log on to our website latestly.com).