Not Aliens, but 4 Men Are Behind the Mysterious Disappearance of Utah Monolith! Pics & Videos of Humans Dismantling the Shiny Structure Go Viral

A group of friends who were photographing the monolith in Utah captured the removal, then shared the pictures on the social media platform, explaining what exactly happened. The photos are proof that it was the work of humans and not aliens. 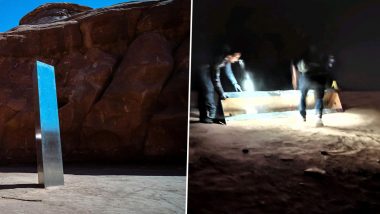 The Utah monolith surely created a lot of buzz on social media lately, after it mysteriously disappeared from the remote desert, leaving no trace for officials to find out who actually did it. Soon after it vanished, the shiny structure fired up the minds of conspiracy theorists and sci-fi fans on the internet. However, recent revelation on Instagram shows that it was removed by four men and not aliens, as many around the world might have hoped. A group of friends who were photographing the monolith captured the removal, then shared the pictures on the social media platform, explaining what exactly happened. The photos are proof that it was the work of humans and not aliens. Not only that! One of the four men even shared a video on TikTok and Instagram, bragging about his exploits.

The Monolith in Utah was discovered in a remote desert in Utah last month, and it was dismantled just a few days later. Officials were puzzled as to who did it, and without much trace at the spot, people had their own speculations, a majority of them were related to aliens. Again, another monolith mysteriously appeared in Romania. Amid all of this, when most of the people around the world were guessing it is the work of aliens, a Colorado adventure photographer named Ross Bernards to disclose the evidence on Instagram.

He managed to document the before and after moments of the monolith being in Utah desert, while a friend of his captured images of four men taking the structure down. As per Bernards, the men viewed the monolith as an eyesore, making comments like, “This is why you don’t leave trash in the desert.”

It does not only ends at these photos. One of the culprits even boasted what he did on social media, sharing a video of him and his peers dismantling the giant structure. Sylvan Christensen has identified himself on Instagram as one of the four men, responsible for removing the shiny 12-foot pillar. Christensen and three others are seen in the video strapping the structure to a wheelbarrow and taking it away from the canyon.

The short clip was captioned, “Don’t abandon your personal property on public land if you don’t want it to be taken out.” Posts on Christensen’s social media pages and media reports identify him as a canyon adventure tour guide for Moab Adventure Tours as well as a base jumper. It is unclear who else was involved in the demolition.

The mystery is nearly solved! However, the monolith which was mysteriously found in Romania vanished as well. A penis-shaped landmark from German mountain disappeared too. Both the disappearance remains mysterious, as of yet and who is behind the act is not known.

(The above story first appeared on LatestLY on Dec 02, 2020 09:02 AM IST. For more news and updates on politics, world, sports, entertainment and lifestyle, log on to our website latestly.com).