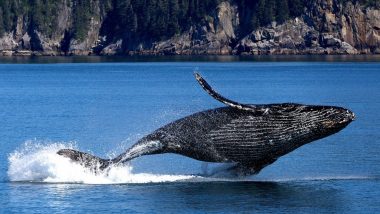 An Australian swimmer was seriously injured after a humpback whale attacked her on Ningaloo Reef. The whale which was trying to protect its calf in the process ended up breaking ribs of the woman. She had internal bleeding after the giant mammal hit her with her tail. The 29-year-old was immediately rushed to a hospital where was in serious but stable condition on Monday. The woman was with a group of swimmers on the tour when they got the chance to swim with humpback whales on Ningaloo Reef. However, one of the whales which were with its calf exhibited some defensive behaviours by positioning herself between the swimmers and her calf. Humpback Whale Mother Protects Calf From Pod of Killer Whales Off Coast of Western Australia, Rare Occurrence Captured on Drone (Watch Video)

A video of the incident taken by a person on the tour boat shows the incident and people calling for help. The company involved, Ningaloo Whaleshark Swim, said that the world’s best practice safety procedures were followed and still the accident happened. Owner and manager Matt Winter told The West Australian that the group had not been in the water for long and was 30m from the whale and its calf when the whale swam near the swimmers.

Adult humpback whales can measure from 48 to 62.5 feet, and weigh around 40 tons. Ningaloo Reef is known for its marine life and a popular snorkelling destination. The woman was flown to Royal Perth Hospital and is expected to make a full recovery. Do You Remember Tahlequah the Killer Whale That Carried Dead Calf for 17 Days? She Is Pregnant Again! (See Pictures)

Swimming with humpback whales is going to be a permanent licensed industry in 2021. It is currently being monitored by Australia’s Department of Biodiversity, Conservation and Attractions. The department released a safety report in January that said swimmers must keep 30 meters, or about 100 feet, away from the whales while in the water, according to the outlet. The department acknowledged in a statement that "swimming with humpback whales involves some inherent risk".

(The above story first appeared on LatestLY on Aug 04, 2020 11:37 AM IST. For more news and updates on politics, world, sports, entertainment and lifestyle, log on to our website latestly.com).