#MumbaiRains is trending on the microblogging platform with photos, videos, funny memes and jokes. People were surprised to see this unseasonal rainfall, amid the worsening air quality in the city. 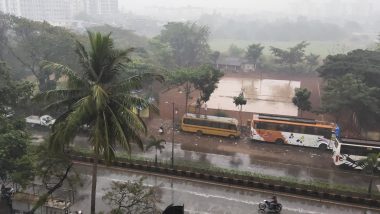 We are in January, and it is raining in Mumbai. Did anyone saw that coming? Well, the weather forecast noted rainfall with thunderstorms for the next few days, and Mumbaikars woke up surprised to see the change in season. The weather had also dipped the temperature for a cosy weekend. As expected, people have taken to Twitter to share the untimely rainfall pictures and videos. #MumbaiRains is trending on the microblogging platform with photos, videos, funny memes and jokes. People were surprised to see this uncalled weather, amid the worsening air quality in the city. In this article, we bring you the photos and videos, and also some hilarious reactions that rightly sum up what it is to experience unseasonal rainfall.

The city is already experiencing ‘very poor’ air quality, and it is worse than Delhi. Untimely rainfall is not new to the city, and last month as well, people woke up to light showers to heavy rains, sparking mixed reactions on the internet. The MET department has reportedly forecasted showers along with thunderstorms for the next few days, starting from today, January 8, covering coastal parts of Maharashtra, Kolhapur, Pune and parts of Marathwada and Chandrapur. The official further noted that the next few hours in these areas might receive thunderstorms and showers.

As the untimely rainfall showered in the city, people have taken to Twitter to share photos, videos and even some hilarious memes, displaying everyone’s reactions to the unexpected weather. Let us check out few tweets as #MumbaiRains take over the microblogging platform.

It's January & it's raining. Mumbai has officially only 2 season. 🙄#MumbaiRains

Are We in a Time Lapse?

Raining in Mumbai. Are we in a time lapse and now we are in June 🤷‍♀️#raininmumbai #MumbaiRains pic.twitter.com/Cwn9YPYZ64

The India Meteorological Department (IMD) reported cloudy skies and light rainfall over interior Maharashtra and Konkan under the influence of active weather systems over the state. The unseasonal rainfall may affect rabi crops as well as mango production in the coastal region.

(The above story first appeared on LatestLY on Jan 08, 2021 08:49 AM IST. For more news and updates on politics, world, sports, entertainment and lifestyle, log on to our website latestly.com).