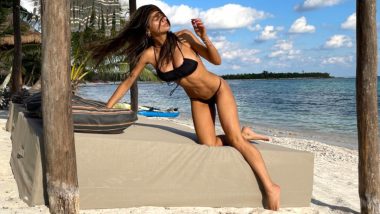 Great news! OnlyFans Queen Mia Khalifa has raised $160,000 aka 11737016.16 INR for a charity! When Mia Khalifa had announced previously that she was joining OnlyFans none would have thought that in such a small duration, she'll manage to raise so much money for charity via the XXX website that is famous for selling nudes. The former-adult-star-turned-activist joined the platform in September and has also indulged in a battle against PornHub.com and production major BangBros garnering support from the audience for the injustice she had to go through. In just four months, the star was able to raise a huge amount for charity from "SFW [suitable for work]… kinda" content. Khalifa captioned her post with: "But first I just want to thank everyone who has supported me on OnlyFans since September. You guys have helped me donate over $160k to charities and organisations that mean the most to me"

"I’m so grateful for the platform and all the incredible, strong, determined women I’ve met through the Internet because of it. You guys have taught me so much and helped me grow as a person in more ways than I can ever thank you for", she further wrote.

Recently, revelations throw light on how she was tricked and sexually abused in her initial days by a vogue photographer and it is the most infuriating detail, the last straw. But the good news is that a petition demanding justice for Mia Khalifa has already received one million signatures. The petition demands Mia Khalifa's domain name to be returned and her videos to be removed by big enterprises.  Mia Khalifa Reveals Chilling Secrets From The Time Her Famous Hijab Video Went Viral and How She Was Sexually Exploited by 'Vogue Photographer' and Bang Bros.

(The above story first appeared on LatestLY on Jan 15, 2021 09:05 PM IST. For more news and updates on politics, world, sports, entertainment and lifestyle, log on to our website latestly.com).