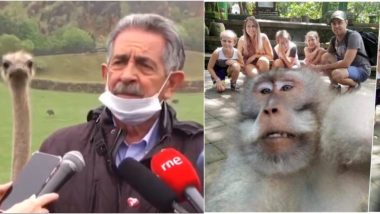 During these tough time the world is going through, it is little things that can make you grin a little. There have been multiple incidents of pets and wild animals interrupting interviews and photoshoots. The recent one to have gone viral is an ostrich which found it appropriate to be grab spotlight when Miguel Angel Revilla, the President of Cantabria in northern Spain was getting interviewed. He had visited the Cabarceno National Park to announce its reopening when the ostrich stood behind him appearing to talk to the reporters. As the video has gone viral with netizens laugh at the funny incident, we bring to you funny videos and photos of animals interfering with the daily lives of humans. Pet Dog Hilariously Photobombs Couple's Engagement Photoshoot, Adorable Pictures Go Viral.

Watch The Video of Ostrich Photobombing an Interview:

A UK couple's proposal pictures were photobombed by otters in Singapore. The picture had gone viral as netizens found it very cute. Jordan Doyle and Mary Lister were watching otters accompanied by a wildlife photographer when some decided to enter their photo frame.

Photo of a monkey photobombing a family's vacation picture in Bali had gone viral last year. The hilarious photo shows the animal giving a middle finger to the camera as the family sits in the background. It was immensely shared on the internet making social media users laugh.

This is the most Indian photo bomb 😂 pic.twitter.com/dtAcmByofW

A video of a dog riding pillion photobombed a BBC film show Talking Movies' special episode shot in Mumbai. Tom Brook was riding in a rickshaw when a dog riding on a scooter grabbed all the attention. The video went viral last year with people laughing at the incident.

Video of a seagull photobombing a traffic camera in London had gone viral on social media last years. The internet cheered as the video went viral. Transport for London Traffic News shared a picture of the seagull looking into the traffic camera at Brunswick Road by saying, "Happy Monday."

Videos and pictures of animals photobombing have always been a matter to laugh. While some are hilarious others are worrisome and may be dangerous. Often these footages go viral as people cannot stop laughing at the funny interferences.

(The above story first appeared on LatestLY on May 28, 2020 02:55 PM IST. For more news and updates on politics, world, sports, entertainment and lifestyle, log on to our website latestly.com).