They have made tiles imaging the Pakistan flag with the slogan Pakistan Murdabad, especially for toilets. 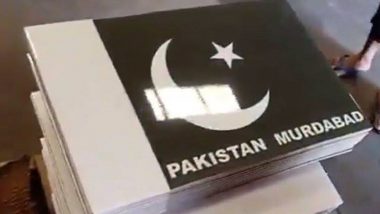 The aftermath of Pulwama terror attack in Jammu and Kashmir is strongly felt all across the country. People are enraged by the attack and there is rising hate for Pakistan across the country. 'Pakistan Murdabad' slogans or burning of Pakistani flags is seen in different parts of the country. Among them, is a ceramic industry from Morbi in Gujarat. They have made tiles imaging the Pakistan flag with the slogan Pakistan Murdabad, especially for toilets. These tiles which spell out hate for the country will be used in making public toilets in Morbi. A video of the same has been shared widely on social media. ‘Pakistan Murdabad!’ Man Shouts Slogans to Protest Pulwama Attack and Sell Shoes at the Same Time.

On February 14, more than 40 CRPF jawans lost their lives post an attack by a terrorist. Strong reactions were felt across the country and soon after when the Jaish-e-Mohammed (JeM) group which is backed by Pakistan took responsibility for the attack, the outrage grew. Their media too hailed the terror group and called the terrorist Adil Ahmad Dar a freedom fighter. There were protests held in different parts of the country to condemn the attack. While some took out silent protests, others urged to make donations and help the families of the martyred jawans. Pakistan Murdabad slogans were shouted in protests and the aftermath has now reached toilet tiles! Pulwama Attack: Pay Real Tribute by Donating Money For Bravehearts Via 'Bharat Ke Veer' App or Online at bharatkeveer.gov.in.

Check Video of Toilet Tiles Made With Pakistan Flag and Pakistan Murdabad Slogans in Gujarat:

Check Pictures of the Tiles Which Read Pakistan Murdabad

A ceramic factory in Morbi district of Gujarat has started manufacturing tiles with the inscription 'Pakistan Murdabad'... The tiles will be used for the construction of public toilets. pic.twitter.com/KCUq0c5pCr #NoWaterForPakistan

They have made up to 25 boxes until now. While these tiles will be used in Morbi, anyone else who wants them in the country will get them delivered. To boycott Pakistan in every possible way, people all over the country are coming up with different ways. A vendor in Chhatisgarh is offering discounts to his customers who shout anti-Pakistan slogans. He gives Rs 10 off to any customer who says 'Pakistan Murdabad.' A similar offer is seen even in Navi Mumbai.

The outrage is not only felt on social media but people are doing all that they can to condemn the attack. This has been the deadliest attack on Indian forces in the last 10 years.

(The above story first appeared on LatestLY on Feb 22, 2019 04:51 PM IST. For more news and updates on politics, world, sports, entertainment and lifestyle, log on to our website latestly.com).