At one point of time in the video, he asks a burka-clad woman to repeat after him and she obliges. 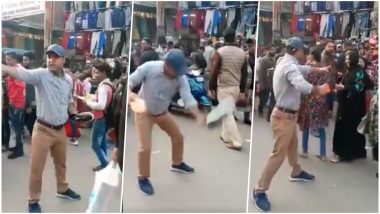 The Pulwama Terror Attack has brought all our blood to a collective boil. While the nation has found ways to express their rage, a shoe seller has been going viral for finding an innovative way to protest the attacks and sell his wares at the same time. A video on Twitter shows him shouting “Pakistan Murdabad” (Death to Pakistan) in a bustling market, while he’s selling shoes. People have been lauding him for his unique way of expressing his anger.

The video has been shared on Twitter by Imran Pratapgarhi on Monday, after which, it has been retweeted more than 500 times and liked more than 2000 times. Bharat Bandh Today: Traders to Hold Nationwide Strike in Protest Against Pulwama Attack, Transport Services May Get Affected.

In the video, the salesman has been heard shouting, “Pakistan Murdabad! Gyarah sau ke teen jode!” (Death to Pakistan. Buy three pairs for Rs 1,100). The passers-by in the video look amused as the man continues to chant the slogan. Pulwama Attack: Ajay Devgn's Total Dhamaal to NOT Release in Pakistan, Declares the Actor.

The ones shooting the video can be heard laughing loudly at the man’s antics. He is also seen flinging a shoe to the ground as he screams “Pakistan Murdabad!” At one point of time in the video, he asks a burka-clad woman to repeat after him and she obliges.

The Pulwama Terror attack took place on February 14, 2019, in Pulwama, Kashmir. Fidayeen recruited by the terror outfit Jaish-e-Mohammed drove an explosive-filled SUV into a CRPF convoy, killing over 40 jawans.

The incident is the most brazen single attack in Jammu and Kashmir in recent years. Pakistan’s involvement in the attack has been suspected since it has always provided a safe haven for terrorists on its soil. The public sentiments against Pakistan have also been mirrored by the government as India stripped its troublesome neighbour’s “Most-Favoured-Nation” status in the wake of the attack. The customs duty on goods from Pakistan has also been hiked to 200 percent in the aftermath of the Pulwama attacks.

(The above story first appeared on LatestLY on Feb 19, 2019 01:04 PM IST. For more news and updates on politics, world, sports, entertainment and lifestyle, log on to our website latestly.com).