Biggest of the social media influencers are being accused of spreading coronavirus after allegedly hosting parties that get lots of guests in attendance. Allegedly, according to currently unproven accusations, some of the influencers, who attended the party hosted social media star Tana Mongeau, have been tested COVID-19 positive. 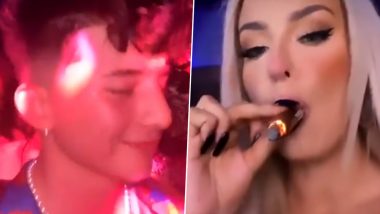 Coronavirus has grappled the entire world. Every day so many people are dying and many aren't able to get access to proper care. Amid all this, famous influencers are being called out for irresponsible behaviour.  Biggest of the social media influencers are being accused of spreading coronavirus after allegedly hosting parties that get lots of guests in attendance. Allegedly,  according to currently unproven accusations, some of the influencers, who attended the party hosted social media star Tana Mongeau, have been tested COVID-19 positive. An anonymous influencer texted comedian Dennis Feitosa to say that many influencers who attended Tana Mongeau's birthday bash are claiming they tested positive for COVID-19. The party reportedly took place in Los Angeles around July 25. Tana Mongeau, James Charles, Charli and Dixie D'Amelio Amongst Others Flock to Larri Merritt's Birthday Party amid Increasing COVID-19 Cases in California! (Watch Videos).

“A few people I know who were there tested positive right after I don’t know how many people in her house tested positive after, but I do know some of them did.” The influencer said they self-quarantined when they got sick, but claimed they knew of several attendees who "continued to go out" after testing positive. "I can’t believe they are still doing this. But the parties aren’t stopping either! I got invited to one last night!", said the influencer who wanted to remain anonymous. Check Tweet:

Mongeau recently also faced flak online after she shared an Instagram video of herself at the party. In the video she has said, “Listen, we don’t f****** care. Sorry.” Although, she apologized for hosting the party, calling it a "careless and irresponsible action," later. However, it didn't stop there, the influencer revealed that they knew of other, similar Los Angeles-based events. A couple of weeks before this a Hype House party was called out after top TikTok and YouTube influencers were seen partying carelessly. Amongst the 67 attendees included Mongeau, Nikita Dragun, James Charles, Emma Chamberlain, Charli and Dixie D’Amelio.

In the above tweet, YouTuber Tyler Oakley posted a tweet tagging the celebs who attended the party urging them to "consider social distancing, mask wearing, & using your huge platforms to encourage responsibility during a worldwide pandemic." To this tweet Merritt quickly replied saying: "i understand 100% where ur coming from & it was a dumb thing to do. I will do better & will actually take this shit seriously. appreciate you tyler much love."

(The above story first appeared on LatestLY on Aug 04, 2020 09:59 PM IST. For more news and updates on politics, world, sports, entertainment and lifestyle, log on to our website latestly.com).