Ahead of Easter 2021, Pepsi revealed that it had teamed up with the squishy candy manufacturers to create a limited-edition, ‘one-of-a-kind,’ new beverage, accurately named ‘Pepsi x Peeps.’ However, the marshmallow-flavoured cola has disgusted people online. 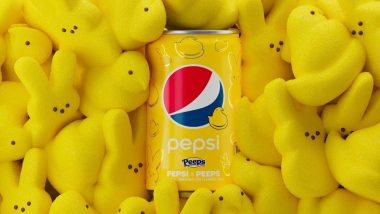 Just when you thought things could not go any weirder, Pepsi announces its Peeps-flavoured soda! Peeps are extremely popular in the United States and Canada. The squishy marshmallows, bunnies and chicks are in extreme demand, especially during Easter. Whether it’s the fame or simply the deliciousness of the sugary delight beverage brand, Pepsi thought to incorporate the well-known flavour into a new soda drink. Well, after the announcement, not everyone is delighted about it. Ahead of Easter 2021, the soda brand revealed that it had teamed up with the squishy candy manufacturers to create a limited-edition, ‘one-of-a-kind,’ new beverage, accurately named ‘Pepsi x Peeps.’ However, the marshmallow-flavoured cola has disgusted people online. Netizens are sharing funny viral memes and hilarious posts roasting the beverage brand.

Food trends are not new to people on social media. Be it netizens or different food companies; they try to come up with new recipe ideas. But not all of it goes well. Over the past years, we have seen many weird food trends, including the pineapple pizza launched by Domino’s in 2019. The pastel-coloured peeps are a common staple during springtime and Easter, but who could have thought that the sugary chicks can be incorporated with a soda drink? Well, Pepsi did!

How To Get Pepsi x Peeps Cans?

We’re “More Than OK” with our newest #PEPSIxPEEPS flavor. Take a photo of you & your PEEPS candy enjoying spring tagging @pepsi w/ #HangingWithMyPEEPS + #PepsiSweepstakes for a chance to win our cans.

Pepsi reported that the new drink would combine, ‘the crisp, refreshing taste of Pepsi cola with the pillowy-soft and sweet Peeps Marshmallow flavour consumers love.” The flavour profile may seem weird; the companies have stuck with the spring and Easter theme when it comes to the design of the soda. The beverage will be available in yellow, pink and blue Pepsi mini-cans and will come in packs of three. Fans across social media have expressed their displeasure over the new drink, reacting with funny memes while roasting Pepsi for its, well ‘one-of-a-kind,’ beverage.

No one, and I mean absolutely no one:

Just the Thought of This Weird Combination Makes Stomach Churn Out

I get that Peeps are epic and all but like, mixing it with Pepsi?

It's like trying to mix Coke with Reese's Cups, you can feel how disgusting it'll taste just by thinking about it. 😶 pic.twitter.com/YKlyKdOBvG

all my teeth fell out just thinking about this new Pepsi Peeps-flavored marshmallow soda pic.twitter.com/NyZgHpqTbN

So, what are your thoughts on this latest marshmallow-flavoured cola? It is important to note that getting your hands on the cans won’t be easy as the beverage will only be available to fans through sweepstakes. To win the three-pack of Pepsi x Peeps soda, fans are encouraged to share photos of themselves on social media, enjoying their springtime activities with the hashtags #HangingWithMyPEEPS and #PepsiSweepstakes.

(The above story first appeared on LatestLY on Mar 26, 2021 10:14 AM IST. For more news and updates on politics, world, sports, entertainment and lifestyle, log on to our website latestly.com).