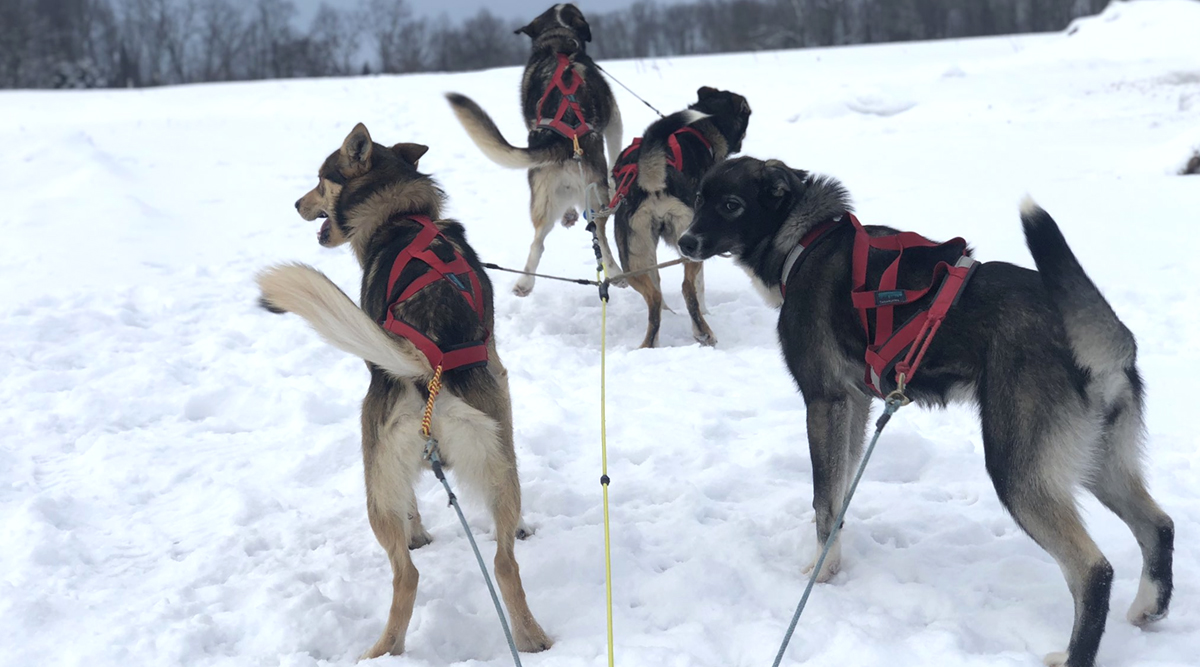 Dogs are prominent companions to human beings. And they make life so much easier! Don’t they? Your pets are always there for you, irrespective of your mood swings. Besides, if you live in a snowy climate, you are surely in for some of the greatest adventures with them. One of those has to be your doggo sledding. Whether you want to commute or just enjoy the snow, dogs are the best to go by. Leap, the husky, recently attempted its first sledding and she loves her new adventure. Twitter user and dogsledder Blair Braverman documented Leap and her first sled run. The viral thread and videos show the pet dog’s short journey while pulling a sled. She visibly enjoyed her new adventure! Woman's Post on Pet Dog's Fallen Nose That Was Actually a Toy Has Left The Internet Laughing to Tears.

In the Twitter thread, Braverman first begins with Leap and her first tries on many things as a pet. Her first successful dog house climb, first leap, visit the retirement garden and enjoying the snow. But she never pulled a sled. Braverman and her pet kick-started the New Year 2020 day by sledding. Senior dog, Pepe and its daughter Willow and another pet Clem guided Leap for her first run. Beautiful Video of Dog Chasing a Ball Unaware of Its Paralysis Wins the Internet's Hearts.

Leap has seen the big dogs run a thousand times, but she’s never done it herself. Clem and Pepé and Willow were howling and jumping with excitement. Leap looked back at me, hopeful but confused. This was a whole new thing and she wasn’t sure what her role was yet. pic.twitter.com/KKHq3OTKk3

“Leap has seen the big dogs run a thousand times, but she’s never done it herself. Clem and Pepé and Willow were howling and jumping with excitement. Leap looked back at me, hopeful but confused. This was a whole new thing, and she wasn’t sure what her role was yet,” Braverman captions the image of the four dogs, ready to sled. Dog Owners Share Outrightly Adorable Photos and Videos of Their Pets Playing in First Snow of This Season.

Look at her go!

Here are Leap’s first 20 feet of pulling a sled. She’s in the back right.

Friends... SHE LOVED IT. pic.twitter.com/EvlOeAcDuW

Here's Another Video of the Doggos Sledding And Running!

Look at her go! pic.twitter.com/PnC6YYB6Ct

Braverman also said that at the edge of the field, she stopped to give Leap and other dogs some praise and pets. But they were in no mood for that, as they were excited to run more and more!

How Happy She Is!

When we got back to the dog yard, her tail was wagging a mile a minute. pic.twitter.com/F7DtKr8g7A

In the follow-up tweets, Braverman stated that Leap would not run long distances until next year. She is older but not fully grown. The puppy will be taking short runs with the older dogs throughout the winter and get better for the upcoming year for her long sled run. We are excited for Leap and her future adventures at the snow!