Barney, the robot is fully automated, mixes dozens of cocktails and even cracks some jokes to comfort you. It takes the order via their mobile phones. The robot is developed by the Swiss F&P Robotics Company in Zurich, Switzerland. 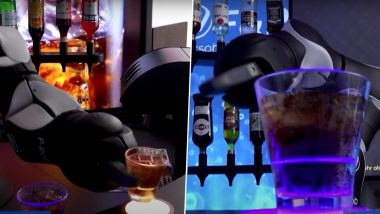 Are robots the perfect pandemic worker? As public places are trying to run with a minimum number of people to limit exposure, many engineers have designed robots to function and take over certain human works. You must be aware of Boston Dynamics robots; now, it is another robot, who has gone viral for its amazing skills in bartending. Barney, the robot is fully automated, mixes dozens of cocktails and even cracks some jokes to comfort you. It takes the order via their mobile phones. The robot is developed by the Swiss F&P Robotics Company in Zurich, Switzerland. Videos on the internet show Barney at the cocktail bar.

It has been over a year since the COVID-19 pandemic hit us. The global crisis has put our regular lifestyle to a halt. During this time, we have seen a rising development of robots to be on the frontline. While humans continue to be at risk, technology is trying to limit further spreading. The Barney Swiss robot will be offering beer, cocktails, and more to reduce human contact during the pandemic.

According to Reuters, the robot can disinfect its own robotic arm and informs the customer their order is ready by a large video display above the bar. A barista version to make coffees is also developed! The report further adds that each model costs around $130,719. The company has so far sold robots to China and Oman, where a mocktail-making robot works in a shopping mall. A video capturing Barney at the bar has gone viral on the internet.

It is not clear if these robots will eventually replace the human bartender. But it is surely fascinating and quite an impressive idea to continue operations while also limiting the spread of the virus.

(The above story first appeared on LatestLY on Apr 22, 2021 05:31 PM IST. For more news and updates on politics, world, sports, entertainment and lifestyle, log on to our website latestly.com).