Sssssurprise! Aussie Girl Finds Venomous Red-Bellied Snake Curled Up in Her Asthma Inhaler, Viral Video Will Give You Nightmares

A teenage girl from Australia got the shock of her life when she found the snake lurking and curled up inside her asthma inhaler. The video and pictures of the discovery are going viral on social media, and will surely give you a nightmare! 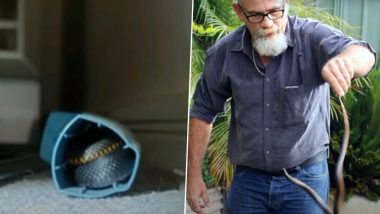 We have had way too many snake videos, with the uninvited reptiles paying a visit to people’s home and gardens and more. Many clips on social media show the serpents of various species scaring netizens with their slithering ssssurprises! But a red-bellied snake has sought shelter in the most unthinkable place—an asthma inhaler. Yes, you read that, right! As much scary it sounds, it is even more frightening to experience. A teenage girl from Australia got the shock of her life when she found the snake lurking and curled up inside her puffer. The video and pictures of the discovery are going viral on social media, and will surely give you nightmares!

As we have mentioned in the beginning, there have been numerous snakes discoveries secretly taking shelters at many corners of house. Last year, a video captured the scariest moment of a snake lurking in the toilet in a West Texas house. Again, there was a horrific incident from the Russian Republic of Dagestan, where a snake crawled into a sleeping woman’s mouth. The thought of such creepy incidents will give you chills in itself.

And here comes another discovery—a snake curled up in an asthma inhaler! According to media reports, the teenager was bringing in washing at her home in Bli Bli, Queensland, when she spotted a red-bellied black snake slither out of the clothes’ basket and into her room. The baby red-bellied snake, then took refuge to the inside of an open-top of her blue puffer. A snake handler from the Sunshine Coast Snake 24/7 rushed to the spot to relocate the innovative snake. He safely captured and rehomed unwanted serpent.

Although the red-bellied black snake was only a hatchling, it could have still delivered a nasty bite if it had felt intimated or been provoked. Red-bellied snakes are said to be Australia’s tenth most lethal snake, and a single bite of the reptile can be fatal. They have venom deadly enough to kill humans, but are on the lower end of the spectrum, and deaths are rare.

(The above story first appeared on LatestLY on Mar 09, 2021 01:24 PM IST. For more news and updates on politics, world, sports, entertainment and lifestyle, log on to our website latestly.com).