Tiger vs Python: Old Video of Unlikely Encounter Between Wild Cat and Giant Snake From Nagarhole Sanctuary in Karnataka is Going Viral

The video from Karnataka has been shared on Twitter by IFS officer Susanta and it has amused everyone. As probably everyone expected an engaging battle from the wild, but instead, the tiger changed its path and walked into the bushes, away from the python. 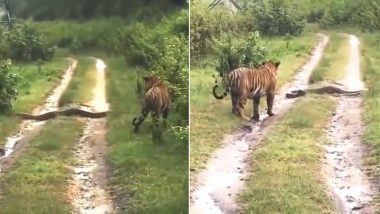 What happens when two dangerous animals tread each other's path? It would usually end in them engaging in a fight of power if one can prey over the another. But something different was seen last year at Nagarhole National Park when a tiger came across a large and deadly python. The video from Karnataka has been shared on Twitter by IFS officer Susanta and it has amused everyone. As probably everyone expected an engaging battle from the wild, but instead, the tiger changed its path and walked into the bushes, away from the python. Leopard Kills a Python and Smashes The Snake's Skull During Epic Battle in Africa's Masai Mara National Park (View Thrilling Pics).

The video was captured last year in August 2018 at the Nagarhole National Park by a naturalist named Sharath Abraham. He put it up on Instagram explaining in the caption this unusual encounter wherein the tiger tried to move past the snake but also did not want to take unnecessary risk and walked into the bushes, emerging from another point passing the snake. IFS officer shared it on Twitter with the caption, "Tiger leaves the way to Python.." and Twitterati is just amused if the snake is so dangerous indeed. Video of Cobra Swallowing a Whole Python in Philippines Goes Viral! Rare Snake Fight Caught on Camera.

Such a fabulous video showing great understanding and cooperative-existence among our animal friends - traits that we humans, need to learn.

Strength is a respectable realization

A wise man or animal always find his way.thats what tiger did.

Probably, both the snake and the tiger were not hungry to make it a battle of prey. Who do you think would be the stronger one among them? Pythons can emerge as the powerful ones as they constrict their preys and this one is such a giant one. Although maybe the tiger can also prove ferocious. But this video gives an important message that there is no need to take unnecessary risks.

(The above story first appeared on LatestLY on Jul 22, 2020 01:39 PM IST. For more news and updates on politics, world, sports, entertainment and lifestyle, log on to our website latestly.com).