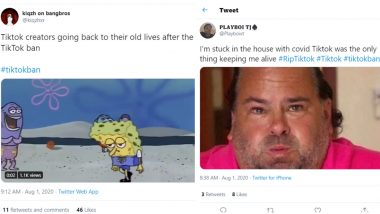 US President Donald Trump has announced that he would be looking at banning the Chinese video-sharing app TikTok. Speaking to one of the reporters aboard Air Force One, Trump reportedly said that he is considering acting on the ban as early as Saturday. The news update spread and TikTok ban memes have come on Twitter. The reason behind this ban is the violating of privacy and data security by the Chinese app. About just a month ago, India banned the popular Chinese app for the same reason following border tensions at LAC in Ladakh. After Trump's announcement, netizens are reacting with funniest memes and hilarious GIFs to express their disappointment at losing TikTok.

In early July, the US Secretary of State Mike Pompeo had said that the United States is "certainly looking at" banning Chinese social media apps which includes TikTok. Now US President Trump said that he plans to sign an executive order to ban TikTok. "As far as TikTok is concerned, we are banning them from the United States... I will sign the document tomorrow," he told the reporters. The thought that TikTok may get banned in the US from Saturday has created panic among some users who have taken to Twitter to express it with funny memes and jokes. #TikTokBan and #TikTok are thus among the top trends on Twitter.

Check Funny Memes and Reactions on TikTok Ban in the US:

Tik Tik users when they found out it ain’t there anymore and don’t know what to do with their lives #tiktokban #tiktok pic.twitter.com/oKHRJJcMo9

Reacting With a TikTok

When TikTok Was Keeping You 'Alive'

I’m stuck in the house with covid Tiktok was the only thing keeping me alive #RipTiktok #Tiktok #tiktokban pic.twitter.com/0WBSaG02mA

Looking For a Job

when tiktok artists have to look for a real job and are asked for their qualifications #tiktok #tiktokban pic.twitter.com/SJDbqZtTDE

Tiktok creators making one last tiktok before it gets banned. #TikTokBan pic.twitter.com/IMHLIaq1OI

TikTok Creators to Their Fans

All the top Tik Tok creators telling their fans to go follow their other social media #tiktokban pic.twitter.com/YwPfcbUMH3

This update comes in right after reports that tech giant Microsoft looking at acquiring the US operations of Bytedance, the owners of TikTok. Trump  also said that while they are considering the ban they are also looking at some alternatives to the video-making platform. Users are surely not happy with TikTok going and the reactions are very clear even if they are hilariously expressed.

(The above story first appeared on LatestLY on Aug 01, 2020 09:39 AM IST. For more news and updates on politics, world, sports, entertainment and lifestyle, log on to our website latestly.com).