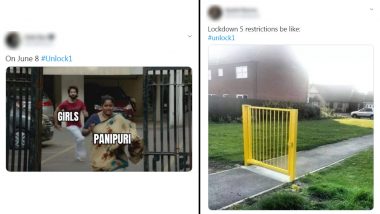 The Ministry of Home Affairs on Saturday announced Lockdown 5.0 until June 30. The ministry also issued guidelines for reopening of all banned activities in containment zones. All places of worship, shopping malls, hotels and hospitality sector shall be reopened from June 8 under Unlock 1. And night curfew has been relaxed from 9 pm to 5 am. As the new lockdown guidelines form the government began to come to Twitterati as usual flooded the micro-blogging site with Unlock 1 memes and Lockdown 5 jokes on the government's decision. From the plight of panipuri lovers to those in containment zones, Twitterati shared an array of jokes and funny GIFs on Twitter. Unlock 1 Guidelines: Hotels, Restaurants, Hospitality Services, Malls, Religious Places to Open for Public From June 8, SOPs to Be Issued Soon.

In areas outside containment zones, religious places of worship, hotels, restaurants, malls and hospitality services will be allowed with effect from June 8 onwards. And that decision made those not in containment zone crack jokes at the condition of those who can't leave their homes with funny jokes and GIFs. Here, we bring to you a collection of jokes and tweets which will make you laugh. And we are some of you can relate to it. Lockdown Extension Funny Memes and Jokes Go Viral Again! Twitterati Share Hilarious Reactions Displaying Their Sentiments Over Lockdown 5.0.

Lockdown 5.0 in a picture #unlock1 pic.twitter.com/m5GMYvH2JW

We Are Sure Many Can Relate:

But you are in containment zone 😭😭 pic.twitter.com/Mywv09hJ9P

What Unlock When Lockdown is in Place?

It is not #lockdown5 but #Unlock1

People saying it #unlock1 instead of #Lockdown5#Lockdown5 be like: pic.twitter.com/ACG8oLSlUQ

Me who already knows it’s not #lockdown5 it’s #Unlock1 pic.twitter.com/aW7X1flNVS

Every time the lockdown was extended, Twitterati would come up with funny memes and jokes on the extension. Meanwhile, the ministry also said that international flights, metros, cinemas, gyms, swimming pools, entertainment parks, theatres and bars will also be allowed after more consultations in June "based on the assessment of the situation" However, there will be no restrictions on the movement of people or goods within states and between states. Also, interstate passes will no longer be required and states can decide to regulate movement.

(The above story first appeared on LatestLY on May 30, 2020 09:14 PM IST. For more news and updates on politics, world, sports, entertainment and lifestyle, log on to our website latestly.com).