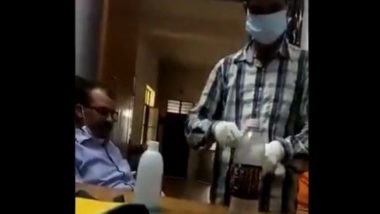 Mathura, September 20: In an incident of dereliction of duty, an Uttar Pradesh-based doctor from Mathura allegedly gave over 15 of his own samples for conducting COVID-19 test to fill the sampling target set by the Chief Minister’s Office (CMO). The incident came to limelight after a video of it went viral on the social media platform.

According to the viral video, a health worker is seen collecting samples from Dr Rajkumar Saraswat at the community health centre in the district’s Baldeo town. The doctor can be heard giving his own samples for conducting COVID-19 test to match the sampling target prescribed by the CMO. After being advised by someone not give so many samples of his own, the doctor sent the samples for testing with fake names. Uttar Pradesh Horror: Man Attacks Pregnant Wife After Priest Predicts 6th Daughter for Them in Badaun.

In a similar incident, Dr Amit -- from same health centre -- had alleged that CHC in-charge Dr Yogendra Singh Rana had pressurised the contractual employees of the facility to collect fake samples if fewer people were turning up to the centre for tests. Also, allegations have been raised that COVID-19 patients were being placed under home isolation with fake signatures of the CHC in-charge.

Following the two complaints and the reports, the Additional CMO Dr Rajiv Gupta had initiated an investigation into the matter.

(The above story first appeared on LatestLY on Sep 20, 2020 08:26 PM IST. For more news and updates on politics, world, sports, entertainment and lifestyle, log on to our website latestly.com).