With rising temperatures, and hot winds, the forest fire has spread across vast regions in Uttarakhand. As the fire continues to spread across the forest, people have taken to social media platforms about the fire. Netizens are sharing incidents of the devastating fire with hashtags such as #PrayForUttarakhand and #SaveTheHimalyas. 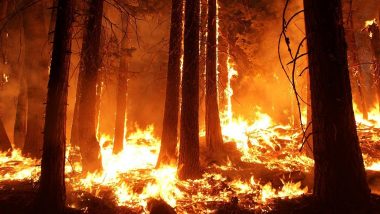 As coronavirus pandemic continues to take the lives of people across countries, India is dealing with multiple other natural disasters. After cyclone Amphan causing a catastrophe in Odisha and West Bengal other than locusts attack in North India, now forest fires are wreaking havoc in Uttarakhand. With rising temperatures, and hot winds, the forest fire has spread across vast regions in the northern state. As the fire continues to spread across the forest, people have taken to social media platforms about the fire. Meanwhile, people are requesting prayers for Uttarakhand on Twitter. Netizens are sharing incidents of the devastating fire with hashtags such as #PrayForUttarakhand and #SaveTheHimalyas. Meanwhile, it has started to rain in some parts of the state bringing a little relief.

According to the forest department, a forest fire broke out in Srinagar district on May 23 and it is difficult to control it due to winds. This is not the first time Uttarakhand is seeing forest time, multiple times in the past the hills stand witness to terrible natural disasters. Celebrities, politicians, commoners have taken to Twitter about the sad state of affairs. Some of the locals of the regions also took to Twitter sharing heart-rending videos of the forest fire. Uttarakhand Forest Fires: #SaveTheHimalyas Trends On Twitter, Netizens Appeal and Pray For Devbhoomi Grappled in Fire Since 4 Days.

Old shitty idea of forest officers .They first cut and sell trees and then put these jungles on fire to cover up their cutting area. It's a very old practice.

It's very painful to see my Devbhoomi burning every year.#PrayForUttarakhand pic.twitter.com/lQlNicRGtI

Save Before It's Too Late!

When we see a forest burning it is even difficult to imagine the scale of the horrific death of wildlife in the fires. Another sign that we must work harder to protect our precious world. Our thoughts & prayers are with Uttarakhand. Pray for rain. #PrayForUttarakhand pic.twitter.com/epif6ZzfGF

The beautiful state of Uttarakhand is burning to ashes. The sight pierces my heart. 💔#UttarakhandForestFire #PrayForUttarakhand pic.twitter.com/GfmlNIRf7f

Situation is Worse than ever.😥

Uttarakhand is burning since 4days. No media coverage,No news,No pray.

This is Deeply Saddening:

It's a moment of utter grief for the entire nation as our devbhoomi Uttarakhand faces the forest fire crisis, and the wildlife specifies that reside in the forest are in grave danger. Please #PrayForUttarakhand that this catastrophy stops with no more loss of our flora & fauna. pic.twitter.com/jxKfSur9PI

Save Before It's Gone:

Uttarakhand has been burning for 4 days. our prayers and thoughts are with Uttarakhand. 🙏🌧

The fire has been moving across the forest for around four days bring down trees. Animals, birds and other species in the hills are also struggling to survive. People also sharing pictures and videos of the forest fire using the hashtag #UttarakhandForestFire. Last week, there have been 45 instances of fires including 21 from Kumaon region and 16 from Garhwal region.

Meanwhile, many photos of the forest fire which are being shared are old and have surfaced now after the recent fire began. Also, PIB Uttarakhand shared a graph to compare the current forest fire activity to the previous years. It shows that the forest fires are less this time and not to fall for rumours and fake news.

(The above story first appeared on LatestLY on May 27, 2020 02:58 PM IST. For more news and updates on politics, world, sports, entertainment and lifestyle, log on to our website latestly.com).