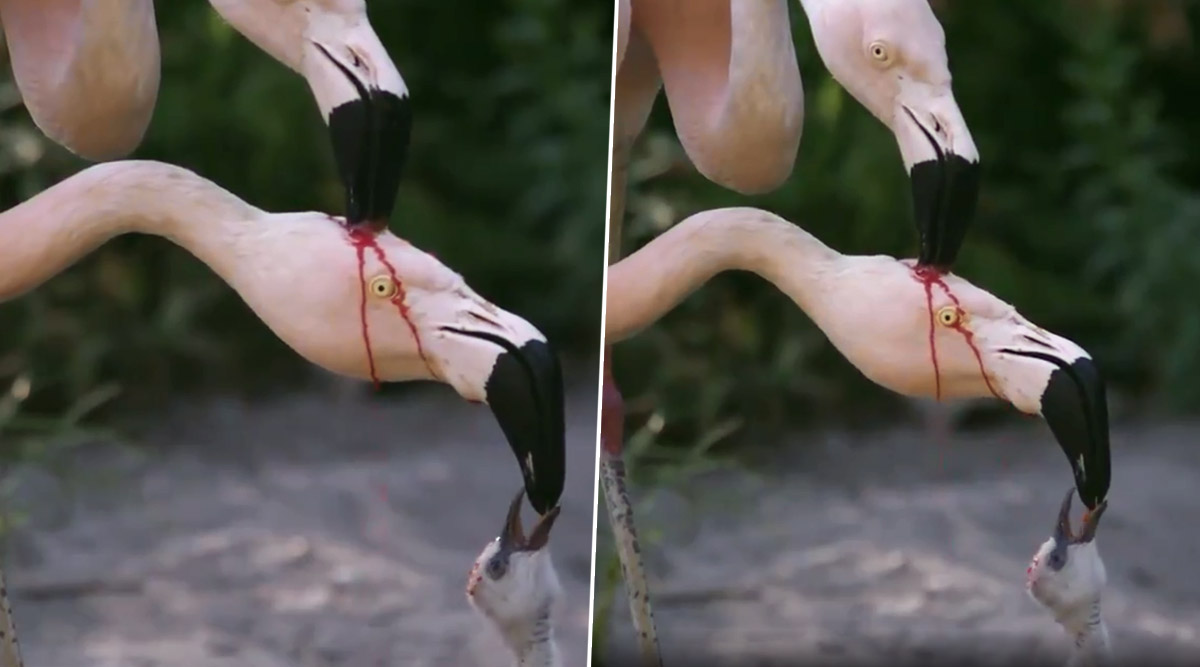 Every few days we have some intriguing videos and pictures from the world of animals being shared online. A video of a flamingo family has been shared on Twitter and it looks a bit scary as the two birds appear to be involved in some serious fight. The video has red-colour liquid oozing out of one bird's head that can be easily assumed to be blood. But Indian Forest Services officer Parveen Kaswan who shared the video revealed that is far from a fight situation. The pair of birds are actually feeding their little one and what seems like blood, is actually crop milk that is produced in their digestive tracks. Fact Check: Did Fox Feed Koala Babies in Bushfire-Hit Australia? Know Truth Behind Viral Video.

IFS officer Kaswan shared the video via Science Channel of two flamingos feeding their little one. At first glance, it is quite terrifying as it looks one of them has attacked the other and there's blood oozing out of its head. But Kaswan explained in his caption that the two birds aren't fighting but it's their way of parenting. The red coloured liquid is crop milk which the bird is regurgitating to feed their young one with the help of other bird. He also added, that crop milk is made up of protein & fat-rich cells of the lining of crop, which is part of the alimentary canal where food is stored before digestion. This piece of information has left everyone on Twitter amazed at the beauty of nature and how it works. Mother Bird Feeds Her Chick a Discarded Cigarette Butt on Florida Beach, Disheartening Pic Highlights Issues of Littering.

Watch Video of Two Flamingos Feeding Their Young One:

One way it's looking for cruel , after understanding your explanation feeling amazed about the nature !!

Thank you for sharing the very informative & interesting facts on Flamingo.

The video has got over 80,000 views and over 8,000 likes. Netizens too were amazed at how nature works in its ways and thanked him for sharing this information. Check how some of them reacted.

The Wonders of Nature!

Oh! The wonders of nature dont fail to amaze us!

It truly is so beautiful. It is amazing how nature has its way of functioning and evolving. The video looks so terrifying at first until you read on the explanation that it's teamwork to feed the young one.