Viral Pic of Giant Feral Cat Carrying 6kg Sand Goanna in Its Jaws at Simpson Desert Will Intrigue You About Weird and Wonderful Wildlife of Australia! 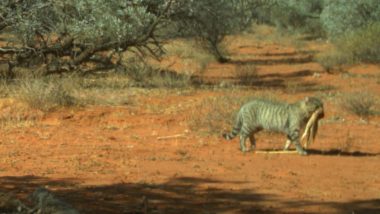 A rare photo of a feral cat biting onto a goanna in its jaws has gone viral on social media platforms. The image shows the feline carrying a sand goanna at the northern Simpson Desert at Ethabuka Reserve near the Queensland-Northern Territory border. The photo was clicked accidentally during a study on decomposing animal carcasses. Talking about the picture, the University of Sydney researcher Emma Spencer said that the photo was just a matter of luck. As the photo went viral many commented that it was weird for a cat to eat a gonna, while others pointed out that it showed the varying wildlife of Australia. Pic of Giant Feral Cat Carrying 6kg Sand Goanna in Its Jaws at Simpson Desert Will Intrigue You.

She was quoted as saying, "The cat with a goanna in its mouth was actually in the background. The large cat was walking behind one of our carcass cameras and we just happened to catch him with a great big sand goanna in its mouth." The researchers were using the cameras to find out what happens to animal carcasses when they died in road accidents, bushfires or drought. The photo was clicked in 2018 but it was only discovered during research held this month. Biosecurity Queensland principal scientist Matthew Gentle said it was a usual sight and not a new occurrence.

Spencer also said that cats often feed on birds and mice, but sometimes also on scavenged animals like kangaroos. She added, "But I definitely say that a cat that size would be very capable of taking out a sand goanna. Though it is surprising, it is definitely possible that cat caught that goanna itself." According to a report co-authored by Biosecurity Queensland, there are around 5.6 million feral cats across 99.8 per cent of the country.

(The above story first appeared on LatestLY on May 25, 2020 01:33 PM IST. For more news and updates on politics, world, sports, entertainment and lifestyle, log on to our website latestly.com).