Kapil Sharma Gets a Mention in Netflix Anthology Ray, Harsh Varrdhan Kapoor Gives Him a Shoutout on Twitter

Ray which stars Harsh Varddhan Kapoor as one of the lead actors in the pathology gave a shoutout to Kapil Sharma after Sharma's friend Rajiv Thakur shared a video from the Netflix anthology. Kapoor can be seen mentioning Kapil in the picture.

Giving a shoutout to the comedian, Harsh also took to Twitter to share a news piece talking about the same.

Take A Look At The Snippet Here: 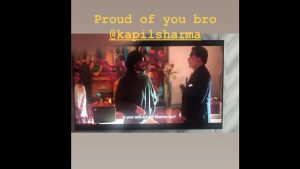