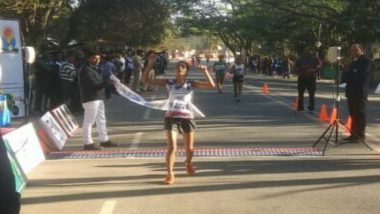 The 24-year-old from Rajasthan clocked a record time of 1 hour, 29 minutes and 54 seconds to bring about her win at the Seventh National Race Walk Championships. She comfortably beat the Olympic qualification mark of 1:31.00.

Her previous best in the category was 1:38.30, which she had set in October last year.

Meanwhile, Priyanka Goswami missed out on the qualification with a narrow timing of 1:31:36, just 36 seconds slower than the Tokyo qualification standard time.

In the men's event, Sandeep Kumar won the race after clocking a timing of 1:21:34. However, he was unfortunate to miss out on the Tokyo Olympics qualification by just 34 seconds which is set at 1 hour 20 minutes.

Kumar will now aim to seal a spot for the Tokyo Olympics at the Asian Race Walk Championship to be held next month in Japan.

"Will try to further improve timing if selected for Asian RW Championships next month in Japan and try to qualify for Tokyo 2020," said Kumar.

KT Irfan had last year become the first Indian from athletics to qualify for the Tokyo Olympics after finishing fourth in the 20 km event of the Asian Race Walking Championships held in March in Nomi, Japan.

(The above story first appeared on LatestLY on Feb 15, 2020 11:07 AM IST. For more news and updates on politics, world, sports, entertainment and lifestyle, log on to our website latestly.com).