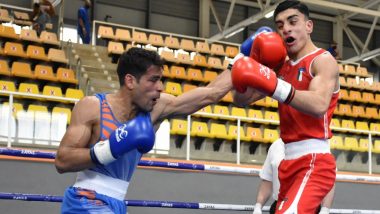 Commonwealth Games champion Vikas, who has already secured a berth for his third Olympics in Tokyo, got rid of Italian Mangiacapre in a 3-2 split decision.

Apart from Vikas, five more Indian men boxers registered victories in their respective quarter-final bouts to assure India six medals in men's category at the 35th edition of the tournament.

Satish Kumar, the first Indian boxer to qualify in +91kg at Olympics, is the other Indian to advance into the semi-finals. He outclassed Denmark's Morten Givskov Nielson 5-0.

With 10 medals already confirmed, India's four women and six men pugilists will look to seal themselves a place in the gold medal match as they will play their semi-finals late in the night on Friday. In the women's category, Olympic bronze medallist Mary Kom (51kg), Jasmine (57kg), Simranjit (60kg) and Pooja Rani (75kg) will be seen in action while all six men boxer, who won on the third day, will play their respective last-four clash late on Friday.

(The above story first appeared on LatestLY on Mar 06, 2021 10:33 AM IST. For more news and updates on politics, world, sports, entertainment and lifestyle, log on to our website latestly.com).